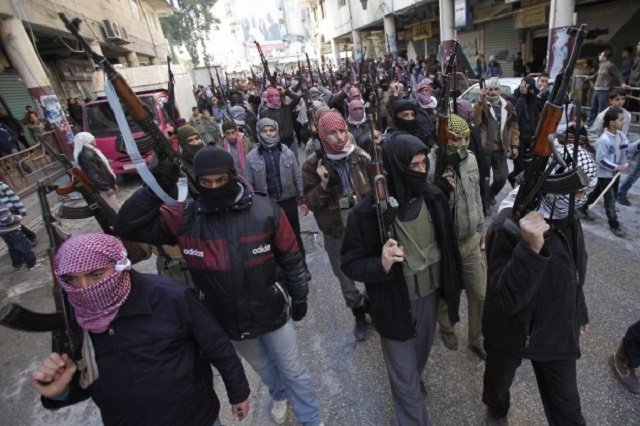 The Syrian regime of President Bashar al-Assad has funded and co-operated with al-Qaeda in a complex double game even as the terrorists fight Damascus, according to new allegations by Western intelligence agencies, rebels and al-Qaeda defectors.

Jabhat al-Nusra, and the even more extreme Islamic State of Iraq and al-Shams (ISIS), the two al-Qaeda affiliates operating in Syria, have both been financed by selling oil and gas from wells under their control to and through the regime, intelligence sources have told The Daily Telegraph.

Rebels and defectors say the regime also deliberately released militant prisoners to strengthen jihadist ranks at the expense of moderate rebel forces. The aim was to persuade the West that the uprising was sponsored by Islamist militants including al-Qaeda as a way of stopping Western support for it.

The allegations by Western intelligence sources, who spoke on condition of anonymity, are in part a public response to demands by Assad that the focus of peace talks due to begin in Switzerland tomorrow be switched from replacing his government to co-operating against al-Qaeda in the “war on terrorism”.

“Assad’s vow to strike terrorism with an iron fist is nothing more than bare-faced hypocrisy,” an intelligence source said. “At the same time as peddling a triumphant narrative about the fight against terrorism, his regime has made deals to serve its own interests and ensure its survival.”

Intelligence gathered by Western secret services suggested the regime began collaborating actively with these groups again in the spring of 2013. When Jabhat al-Nusra seized control of Syria’s most lucrative oil fields in the eastern province of Deir al-Zour, it began funding its operations in Syria by selling crude oil, with sums raised in the millions of dollars.

“The regime is paying al-Nusra to protect oil and gas pipelines under al-Nusra’s control in the north and east of the country, and is also allowing the transport of oil to regime-held areas,” the source said. “We are also now starting to see evidence of oil and gas facilities under ISIS control.”

The source accepted that the regime and the al-Qaeda affiliates were still hostile to each other and the relationship was opportunistic, but added that the deals confirmed that “despite Assad’s finger-pointing” his regime was to blame for the rise of al-Qaeda in Syria.

Western diplomats were furious at recent claims that delegations of officials led by a retired MI6 officer had visited Damascus to re-open contact with the Assad regime. There is no doubt that the West is alarmed at the rise of al-Qaeda within the rebel ranks, which played a major role in decisions by Washington and London to back off from sending arms to the opposition.

But the fury is also an indication that they suspect they have been outmanoeuvred by Assad, who has during his rule alternated between waging war on Islamist militants and working with them.

After September 11, he co-operated with the United States’ rendition programme for militant suspects; after the invasion of Iraq, he helped al-Qaeda to establish itself in Western Iraq as part of an axis of resistance to the West; then when the group turned violently against the Iraqi Shias who were backed by Assad’s key ally, Iran, he began to arrest them again.

As the uprising against his rule began, Assad switched again, releasing al-Qaeda prisoners. It happened as part of an amnesty, said one Syrian activist who was released from Sednaya prison near Damascus at the same time.

“There was no explanation for the release of the jihadis,” the activist, called Mazen, said. “I saw some of them being paraded on Syrian state television, accused of being Jabhat al-Nusra and planting car bombs. This was impossible, as they had been in prison with me at the time the regime said the bombs were planted. He was using them to promote his argument that the revolution was made of extremists.”

Other activists and former Sednaya inmates corroborated his account, and analysts have identified a number of former prisoners now at the head of militant groups, including Jabhat al-Nusra, ISIS and a third group, Ahrar al-Sham, which fought alongside Jabhat al-Nusra but has now turned against ISIS.

One former inmate said he had been in prison with “Abu Ali” who is now the head of the ISIS Sharia court in the north-eastern al-Qaeda-run city of Raqqa. Another said he knew leaders in Raqqa and Aleppo who were prisoners in Sednaya until early 2012.

These men then spearheaded the gradual takeover of the revolution from secular activists, defected army officers and more moderate Islamist rebels.

Syrian intelligence has historically had close connections with extremist groups. In an interview with The Daily Telegraph after he defected, Nawaf al-Fares, a Syrian security chief, told how he was part of an operation to smuggle jihadist volunteers into Iraq from Syria after the 2003 invasion.

Aron Lund, editor of a website, Syria in Crisis, used by the Carnegie Endowment to monitor the war, said: “The regime has done a good job in trying to turn the revolution Islamist. The releases from Sednaya prison are a good example of this. The regime claims that it released the prisoners because Assad had shortened their sentences as part of a general amnesty. But it seems to have gone beyond that. There are no random acts of kindness from this regime.”

Rebels both inside and outside ISIS also say they believe the regime targeted its attacks on non-militant groups, leaving ISIS alone. “We were confident that the regime would not bomb us,” an ISIS defector, who called himself Murad, said. “We always slept soundly in our bases.”

Iran the cunning chameleon according to Harold Rhode
Israel’s Syrian Opportunity!
The bastards are stoning our women
Radicalism 567