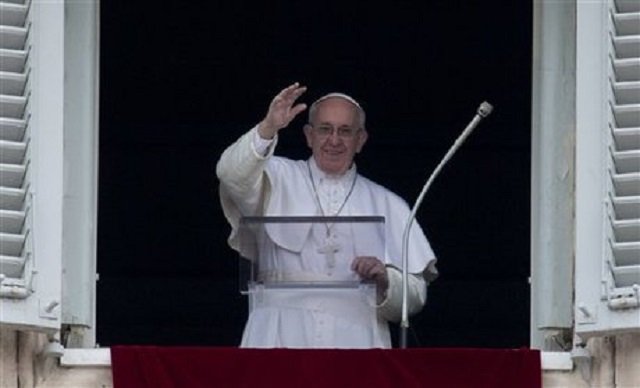 Sorry Papa, Only Violence Against Assad Will Spare Us Assad’s Violence

Pope Francis on Sunday urged the world community to make every effort to revive the Syrian peace talks and appealed for unstinting generosity for civilians fleeing the conflict. Sorry Papa, only violence against Assad will spare us Assad’s violence. Assad is a psychopath that understands but the language of death and destruction.

The pontiff said at his weekly Angelus prayer.

“I appeal to the international community to spare no effort to urgently bring parties back to the negotiating table. A political solution to the conflict is the only way to guarantee a future of reconciliation and peace for this dear, suffering country,”

Then Pope Francis asked his worshipers in St. Peter’s Square to join him in reciting the Catholic prayer “Ave Maria” for Syria. Thank you for your prayers Pope Francis, but psychopaths like Assad understand but the language of violence.

The pope also said he was deeply concerned about the plight of civilians forced to flee their homes as fighting raged.

“I hope that, thanks to generous solidarity, there will be the necessary help to ensure their survival and dignity,” Maybe next time he can name Putin for his criminality in Syria. It would go a long way in pressuring the right people to halt their madness.

The Syrian peace talks were suspended on Wednesday amid renewed fighting on the ground, with advances into rebel-held territory by the Russian-backed regime in Damascus.

The negotiations were suspended until February 25, which Putin will sabotage again, and Kerry would like the fool that he is. Again.

U.N. envoy Staffan de Mistura says he will meet in Munich, Germany, next Friday with countries that are part of an international group seeking a solution to the five-year-old war. Good luck with Putin’s leach let loose by Barack Obama.

Sorry Papa, Only Violence Against Assad Will Spare Us Assad’s Violence

Russian Puppet to Die in Russia
To Defeat Assad, We Have to Defeat Obama
Do Unto Others..
Syria 450 Syria News 1210 Western Appeasement 481

Loading...
Newer Post
Obama caves on Syria, does nothing to help innocent civilians
Older Post
Too Much Arab Talk When Action to Save Aleppo is Needed