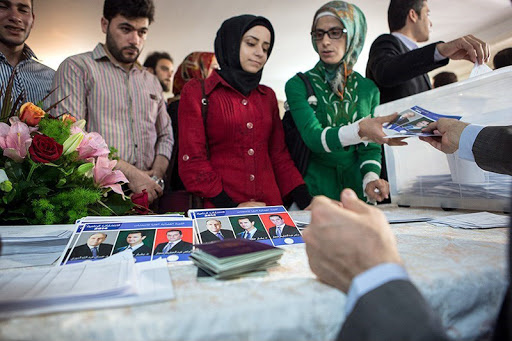 The Two Most Oxymoronic Words in the Arab World

May 8, 2020 6:21 pm 0
Similarities Between Trumpism and Assadism
Russia is Behind Laundering Assad Crimes
Assad Family Two Large Sources of Revenues

AP published a story in which it stated that the Syrian Elections have been delayed for the second time due to the coronavirus threat. The stringer who wrote the article imprudently used the words “Syrian” and “Elections” side-by-side. In our humble opinion, the two most oxymoronic words in the Arab world are the two AP used in a nonchalant fashion in its article.

You be the judge after we detail below what the Syrian Elections are really about.

In any civilized society, the word “election” conveys empowerment, choice, and fate. Holding an election, after all, is a process by which the people express their political choices with regard to selecting their leaders. Except in Syria where an election is a process for one man to threaten and frighten his people.

It is a mechanism to strike fear into the hearts of millions of people all at once, and then call it “Elections”.

Again, in the civilized world, ballots used to cast a vote provide the people the means by which they select candidates or referendums. In Syria, ballots have two choices, which are represented by the word “Yes” and the word “No”.

At first glimpse, and to the naked eye, the words “Yes” and “No” are nonsensical. “Yes” to what and “No” to whom.

Syrian elections, for the past fifty years, have always been about selecting a man from the Assad family. Between 1971 and 2000, it was Hafez al-Assad, and between 2000 and 2020, it is about the butcher of Damascus, the one and only psycho Baschar al-Assad. The “Yes” and “No” are simply asking people whether they want Assad to be President or not.

Wait. That’s not the catch.

The catch, besides having no choice, are the numerous security agents looking over the shoulders of people to scare them into selecting “Yes”. That’s the Syrian Elections AP wrote about in its article. Invariably, one Assad or the other usually wins by a 97% to 99% margin.

Eat your heart out Donald Trump. You can dream of Assad’s popularity extracted with a gun to one’s head.

WHAT ARE THE SYRIAN ELECTIONS ABOUT?

So, why does Assad bother one might ask? Why hold an election if the ballot is a “Yes” for him, or a very rare “No” while an Assad Stasi agent watches you like a hawk?

It is precisely for that reason Assad holds the elections. To remind every Syrian that his security are watching them all the time. The Syrian Elections is a massive conveyance of one powerful message, delivered by one man, and aimed at striking fear into the hearts of millions all at once, all in one day, all to serve the sick mind of one man.

So, when western news organizations, whose value system is as healthy as their societies, write about “Syrian Elections”, the rest of us who know better just shake our heads. You can forgive AP. Their people don’t know any better. Their reflections of what an election stands for mirror those they experience at home.

Next time you read about Syrian Elections, think not only of how oxymoronic they are, but think of how sickening it is to live under a violent and brutal authoritarian regime that uses a democratic process to brutalize you further.

There are many reasons to hate the Assad regime. Holding Assad elections, an immensely cruel process, happens to showcase why. Why Syria is experiencing a civil war; and why Syrians will never stop until Assad is deposed.

The Two Most Oxymoronic Words in the Arab World