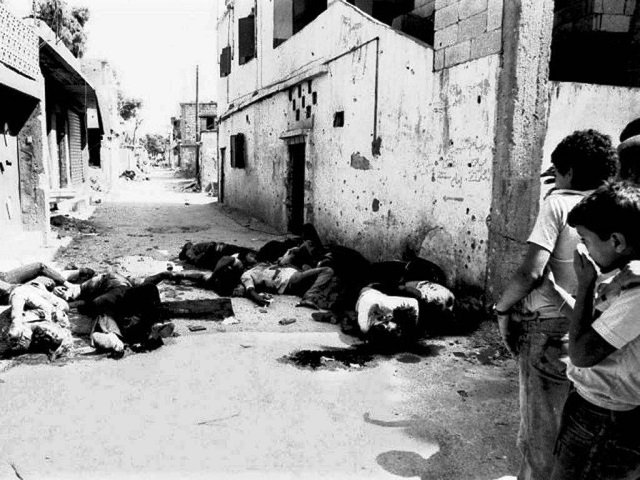 The real butcher of Sabra and Shatila is Assad

PM Ariel Sharon died on Saturday at the age of 85 leaving behind a legacy of courage and determination when it comes to his people and a legacy of misery for the Palestinians aiming to dislodge the Jews from their ancestral lands. Very few Prime Ministers, during the young age of Israel, have done so much in so little time and in return gained so much controversy in a tenure any other Prime Minister in any other democratic country under constant threat of violence and terror would have certainly done.

One of those controversies etched in our minds is the Sabra and Shatila massacre for which the world community accused PM Sharon of facilitating. Now becomes known new information that behind that massacre are the footprints of Hafez al-Assad. The style, in fact, fits perfectly with the MO of the Assads.

Professor Franck Salameh, a Boston College Associate Professor, disclosed for the first time that the Sabra and Shatila massacre was indeed committed by Assad to punish Israel. Assad did not take kindly to Israeli meddling in Lebanon and to put an end to Israeli incursion, Assad “manufactured” Sabra and Shatila to push the Israelis out. For all intended purposes, Assad always felt that Lebanon was his and if the Americans show-up, he will blow them (US Marines 1983) and if any Lebanese politician becomes a threat to Assad, he will blow them up as well. He could not blow-up the IDF, so he manufactured a massacre against it.

Rafik Hariri, Bashir Gemayel, Rashid Karameh, Dany Chamoun, Rene Moawad, Pierre Amin Gemayel, and Elie Hobeika, the very same person accused of the Sabra and Shatila massacre, are just some of the names of hundreds of politicians the Assad regime killed while occupying Lebanon. Elie Hobeika was killed to silence him.

“Besides the Kahan Commission’s mention of armed elements dressed in Lebanese Forces uniforms entering Sabra and Shatila between September 16 and the morning of September 18, 1982, there is no hard usable evidence to support the scenario of murderous Lebanese Christians itching to mete out revenge on Palestinian refugees for the assassination of President-elect Bashir Gemayel; that is to say there is no concrete usable evidence besides eyewitness reports of “men dressed in LF uniforms”—knowing full well that “uniforms” of every stripe were a dime a dozen in civil-war-era Lebanon.”

If only people can grasp how deceptive and violent the Assad family is, they will heed the words of Prof. Salameh. Putin could not have dreamed for a better mini-Stalin to protect the Soviet anti-American interests in the Levant. Yet, when the US had her chance, Barack Obama dithered and backed off. US interests will always be at risk as long as the Assads are in power.

Why the Christians of Lebanon could not have committed the massacre, Professor Salameh explains fully and logically:

“Although few Westerners today might remember Bashir Gemayel (or his assassination), and fewer still might be tempted to consider the motivations of those who commissioned his murder, rare are those who would not readily recall the massacres at Beirut’s Sabra and Shatila Palestinian refugee camps, and rarer still are those who would not attribute those crimes to “right-wing” Lebanese-Christian militiamen—ostensibly bent on avenging their fallen leader.  Never mind that Gemayel’s elimination and the ensuing massacres of Palestinian civilians hardly served the cause of Lebanon’s Christians.  Indeed, the events in question plunged Lebanon into another eight years of bloodshed, tightened Syria’s grip over the country, turned it into a Syrian “satellite state” wholly bound to the whims and will of Damascus, and reduced the status of Lebanon’s Christians to a state of subservience and political insignificance.  Yet, the narrative that attributes Gemayel’s killing to Israeli agents, and the Sabra and Shatila massacres to Israel’s Lebanese Christian allies—getting Syria off scot free—still has its defenders, and still defines a significant chapter in Lebanon’s modern history.”

Because the Lebanese Constitution calls for the President of Lebanon to be a Christian Maronite, the Maronites of Lebanon are under constant attacks and duress to either walk the plank or do as told by the Assads. The Assad family in Syria is often their primary persecutors, judge, and carriers of injustice against their brightest politicians and speakers.

Finally, Salameh discusses in details the efforts taken by the Maronite Community to reconcile and build for the future for ALL Lebanese, which to me is just another Assad smoking gun. Remember that the Assads’ ideology was and remains to “resist” the west, which is a code word for spreading chaos and terror everywhere their footprints go.

“Incidentally, throughout their troubled twentieth-century history, Lebanon’s Maronites always opted for reconciliation, power-sharing, and a “multi-ethnic,” rather than a purely Maronite or a Maronite-dominated state.  To wit, when the French warned the Maronites about the “demographic time bomb” that Grand Liban of 1920 would become in twenty years’ time and advised them to construct a smaller “Christian homeland” instead, the Maronites opted for a “larger Lebanon” as a model of multi-ethnic (Christian-Muslim) coexistence. When another such opportunity for a smaller, culturally homogenous, Christian Lebanon offered itself in 1926, the Maronites still opted for “coexistence” with Lebanon’s Muslims.  They did so time and again in 1936, in 1958, in 1976, and most importantly, at the height of their political and military power, in 1982.  What is more, Bashir Gemayel’s assassination dashed the hopes and snuffed the exuberance of a wide cross-section of Lebanese society—Muslims and Christians alike—and in the aftermath of his death the LF were scrambling to deal with the trauma, the disarray, the mass popular despondency, and the political vacuum that his sudden disappearance had left.  It is, therefore, more than dubious that in a moment of national trauma such as this, the LF leadership would be plotting and executing a massacre that not only would have tarnished their image among the Muslims they’d been courting, but one that would have impugned their very legitimacy in the wider Arab world—which Bashir had been visiting for years prior, promoting his presidential platform and his national salvation and reconciliation project, and hawking his intent on hammering out an eventual “end-of-conflict” agreement with Israel.”

I attest to these words as a Muslim who lived amongst the Christians of Lebanon. I was never a witness to any of the egregious behavior the Assad regime intentionally wants them labeled with to weaken their resolve and to submit them to his rule. Just the opposite, their kindness and exemplary behavior, not just the Maronites, but also all the Christians, attest to their innocence. Against the background of all the atrocities Assad is committing today against the Syrian people by gassing women and children and firing SCUDS against the helpless and the weak while they sleep, who, in your mind, is the real culprit behind Sabra and Shatila?

Hafez, Rifaat, Baschar, and Maher al-Assad have caused more death against the Christians of Lebanon than any other country or army in modern history. Furthermore, I believe PM Ariel Sharon will be exonerated one day if only the international community puts the Assad on trial to uncover a long trail of treachery, violence, and terror this family has committed for over 43 years of rule.

Mr. Obama does not realize what he has done in keeping Assad in power and history will judge him for the feckless and narrow-minded Commander-in-Chief that he is.

The real butcher of Sabra and Shatila

For Every Carter, There is a Reagan
Syrian Christians: They Don’t Need to Be Caught Between a Regime of Terror and Intolerant Islamists
How the UN Let Assad Edit the Truth of Syria’s War
Assad Genocide 427