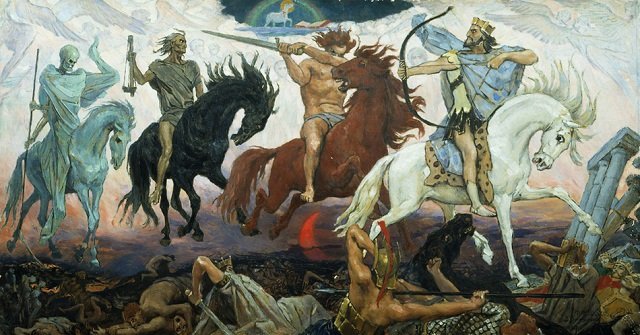 A Tale of the Four Horsemen of the Apocalypse

January 12, 2014 12:01 pm 0
Assad Regime Threatens Israel With Tunnel Warfare
Kurds Are Paying the Price for No-Fly-Zone in Syria
The Head of the Snake is Assad, Not Anwar Ruslan

If you step back to analyze the situation in the Levant today, it is not hard to conclude that all the mayhem, terror, and violence are mostly the results of four men we should label as the Four Horsemen of the Apocalypse. Two anti-Assad men who recklessly helped his regime to maintain its grip (Erdogan and Morsi), one who believed that among the Syrian population of 23m, Assad is the best man for the job (Putin), and one who could care less unless Syria helped lower his Golfing handicap (Obama). This is the tale of the Four Horsemen of the Apocalypse.

Mr. Obama never met with the liberal Syrian opposition or attempted to study the alternative to Assad. From the start of the Syrian Uprising, he outsourced that task to Erdogan of Turkey who chose Istanbul, not Ankara or a neutral ground, to concoct an Islamist opposition a stone throw away from the Ecumenical Patriarchate of Constantinople. One representing the very same Christians Assad protects in Syria.

From securing all of Constantinople up until 1453, the Church today occupies about one acre of land. Mainly because of Muslim conquests. How else would they interpret Erdogan’s poke in the eye, not only geographically but constitutionally as well?

Erdogan’s miscalculation provided Assad with a gift that will come back to haunt all Syrians. The Christians of Syria rallied even more around Assad. Even the US State Department missed that little detail of where the Syrian opposition was meeting.

Had the US State Department consulted with the liberal Syrian oppositionists more, they would have warned them. Further, US State never objected to the make-up of the Syrian opposition. Until it witnessed the actions of Morsi of Egypt when it was too late.

In Russia, Putin saw what Erdogan was doing as not only threatening the very same Church he has her full political support at home, but he also saw the Islamists rising at the expense of the new Russian interests they were beginning to build in the eastern Mediterranean. It is 1453 all over again. Muslims are ransacking an order on the eastern shores Putin was unwilling to yield to its destruction.

His visit to Israel must have carried that tone of the lurking danger of Islamism in the Levant. However, his alarm sounding took on a life of its own when Morsi of Egypt resorted to the violence Putin warned the West about.

THE VIOLENT PUTIN OBAMA USHERED UNTO THE SCENE

The White House reluctantly abandoned Erdogan and the Muslim Brotherhood and relegated the title of the Levant’s Czar unto Putin. A convenience Obama found useful because Putin played a role in the US-Iran Deal.

Putin is out to destroy these interests while Obama sleeps at the helm. His obsession with Obamacare is indirectly harming the US internationally. With all the violence and the spread of al-Qaeda in Syria, Lebanon, and Iraq, Obama has yet to utter the word “Syria” in any of his conversations.

It is now in Putin’s hand. The barbaric Putin is using blanket punishment tactics to include the barrel bombs Assad is dropping on civilians.

If Lebanon, in the safe hands of the Maronite Church, can prosper and co-exist with a majority Muslim population, there is no reason to believe a similar peaceful political arrangement cannot be engineered in Syria without the brutality of Assad

We saw that same violence against civilians in Afghanistan, Bosnia, Chechnya, and now Syria. In each of these cases, Russia not only lost to that violence, it helped it multiply. We believe the US should not lose sight of this fact because it may come back to haunt us later. There is no good outcome, for the West as a whole, when violence against civilians becomes the norm. It emboldens the extremists and leads to a culture of extreme violence with 11-years old as its flag bearers.

Not only our President handled Syria wrong when bloodshed erupted, but he contributed to that bloodshed because of his ignorance of history. Had the Antioch Orthodox Church been involved in the deliberations of the Syrian opposition and its make-up, Syria might look different today.

A TALE OF THE FOUR HORSEMEN OF THE APOCALYPSE

As we often said before, Syria and Lebanon share similar demographics. If Lebanon, in the safe hands of the Maronite Church, can prosper and co-exist with a majority Muslim population, there is no reason to believe a similar peaceful political arrangement cannot be engineered in Syria without the brutality of Assad. However, Obama is too busy golfing and there lies yet another proof he is not a leader. He is but a speaker.

Why can’t we have in Syria a Christian President, a Sunni Prime Minister, a Shia Speaker of the Parliament, and an Alawite head of a professional army with constitutional powers to protect Syria and its people collectively? Assad was never the answer in Syria; nor is Islamism or secular violence in whatever chameleon color they wear.

It is truly unfortunate that the Syrian Uprising, turned Revolution, turned into a civil war, turned into the formation of the Islamist State of Iraq and Syria, turned into al-Qaeda spreading like wild fire could have been avoided if we had a US President with enough commons sense, knowledge, and leadership skills to take advantage of the opportunities Syria offered.

History judging Assad the terrorist, Obama the inept, Putin the barbaric, Erdogan the vindictive, and Morsi the loser all correctly is our only consolation now as Syrian-Americans.

A Tale of the Four Horsemen of the Apocalypse