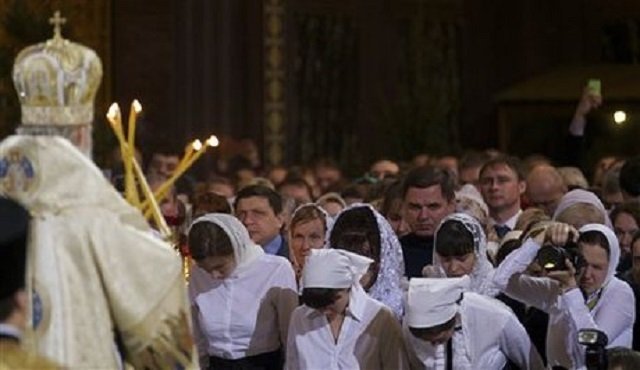 “As long as the war is carried out in self-defense, then it is just. All that is happening is a self-defensive, responsive action. In that sense, we can safely talk about it is a just struggle.”

Excuse us for asking Patriarch Kirill, but are you thinking Constantinople 1453 A.D. when you call it a “defensive war”? If so, then say it, loud and clear so that every Sunni Muslim learns his history.

Say it so that everyone involved in today’s atrocious Syrian war understands well the reasons why a benevolent Church following in the footsteps of the son of God and a Prophet who died for our sins is able to justify backing a butcher like Assad. The Orthodox flocks are confused otherwise you would not have uttered these words during this Christmas season to appease their conscience.

Nothing, absolutely nothing, justifies a Church that teaches love, forgiveness, and mercy to its followers to stand by the criminality of a psychopath like Baschar al-Assad. Unless that position is a response to what happened in 1453 when Muslims lay siege to Constantinople, and was renamed Istanbul forever thereafter.

If so, have the courage to state the reason out loud instead of backing a war criminal. Not all Muslims want to chase Christianity from the Middle East, but as long as Assad lives, he will always attract those Muslims who will never stop until all Christians are chased out of the region to the detriment of a more moderate Islam.

Muslims and Christians can co-exist peacfully as they do in Lebanon without the psychopath Assad.

Meanwhile, we wish all the Orthodox Christians around the world a Happy Christmas.