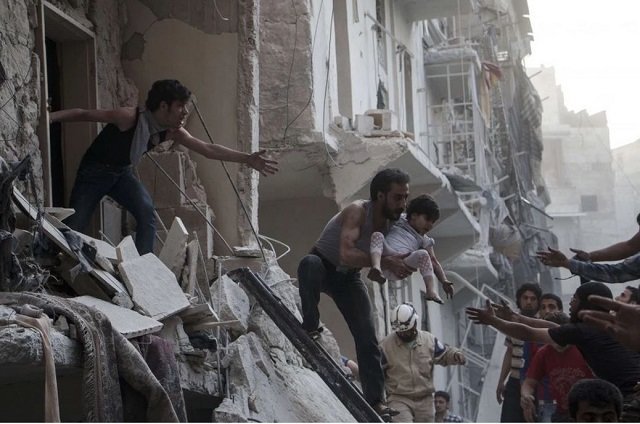 Source: The Washington Post – by Jennifer Rubin (The Iran deal helps perpetuate the slaughter in Syria)

Let’s assume you think the Iran deal is weak, so weak that it won’t stop Iran from getting the bomb. But hey, at least Iran won’t get one for a few years. That reasoning ignores the death and mayhem to which Iran will contribute in short order with $150 billion in unfrozen funds and access to conventional weapons and missiles. Considering what is occurring in the Middle East, this may be the worst possible moment to enrich Iran.

If President Obama is not candid, Syrian President Bashar al-Assad sure is:

The powerful Lebanese Shiite movement, along with Russia and Iran, have been Assad’s major allies since Syria’s revolt broke out in 2011.

“We have strong confidence in the Russians, as they have proven throughout this crisis, for four years, that they are sincere and transparent in their relationship with us,” Assad said. . . . Assad had been asked by Al-Manar’s correspondent about US President Barack Obama’s comments earlier this month that Russia and Iran “recognize that the trend lines are not good for Assad.”

He rebuffed the statement, saying Iran, too, remained a steadfast ally. He said the recent nuclear deal between Iran and world powers would strengthen Iran’s role internationally, in turn benefiting Syria. “The power of Iran is the power of Syria, and a victory for Syria is a victory for Iran.”

The president added: “We are on the same axis, the axis of resistance.”

How could he not be delighted? Once again Obama is giving way, allowing Iran to emerge the dominant power in the region and to continue its support for Assad’s reign of terror and bloodshed. (Hamas and Hezbollah, two other Iran proxies, are similarly delighted. More weapons, more support and more prestige — all in the cause of ridding the region of the Jewish state.)

Former ambassador Frederic Hof reminds us that the administration has never done more than issue empty words about the mass murder it does nothing to halt:

“In its single-minded pursuit of a nuclear agreement with Iran, the Obama administration adopted a Syria policy rich in rhetoric and empty of substantive action. Getting a legacy-boosting nuclear deal with Iran was everything for the Obama administration. Nothing should be done in Syria that would offend Iran’s supreme leader, Ayatollah Ali Khamenei, or the Islamic Revolutionary Guard Corps’ support for Assad’s mass murder strategy.”

Obama is not merely deaf to the pleas of Syrians; far worse, he bolsters Assad’s patron.

“Syrians who mourn for the dead and dying of Douma cry out to the civilized world for protection,” Hof writes. The administration tells them to scram; it is making history with Iran. Unfortunately, “transforming the Middle East” entails making Syrians’ plight even more dire.

And don’t think the plight of Syria can’t get worse. The Post’s editorial board observes:

So many war crimes have been committed by so many parties in Syria that it becomes easy to lose track of the toll.

The destruction of Palmyra is a war crime. So is the Assad government’s indiscriminate deployment of “barrel bombs” in civilian areas and its repeated use of chlorine gas — attacks that have accelerated the displacement of more than 11 million people, about half of Syria’s pre-war population, 4 million of whom have fled to other countries.

Through it all, Western governments, led by the Obama administration, have shied away from any decisive action.

In that light, consider the moral depravity of the Iran deal: Those barrel bombs, the regime’s other instruments of death and Assad’s defenses all will be strengthened by Iran’s increasing largess under the Iran deal. The funds and weapons come from Iran, but Obama opens the floodgates. It is becoming increasingly difficult to make a distinction between enabling Iran’s revival (which the deal surely does) and enabling a killing machine that slaughters innocents.