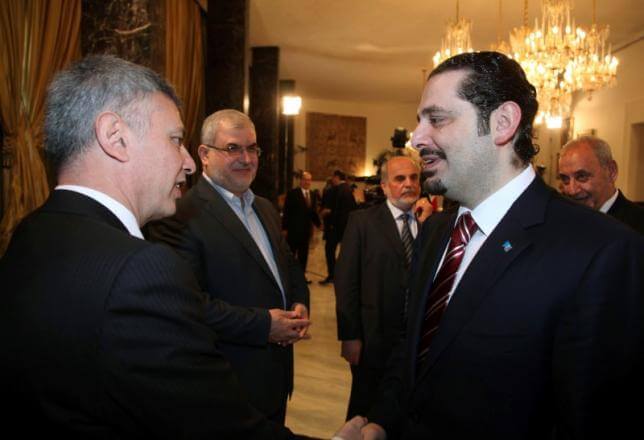 November 30, 2015 6:36 pm 0
Crocodile tears president cries for the Jews
Do Unto Others..
Badr Organization Fighters Pose with US M1 Abrams Tank

Lebanon’s political crisis has taken a dramatic turn with the possibility that a friend of Syria’s psychopath Baschar al-Assad could become president in a power-sharing deal aimed at breathing life back into the paralyzed state.

The idea of Suleiman Franjieh, a childhood friend of Assad, becoming head of state has taken aback many Lebanese, not least because of who tabled it: Saad al-Hariri, a Sunni politician who leads an alliance forged from opposition to Syrian influence in Lebanon. He would become prime minister under the deal.

Thanks to Obama’s Iran deal, Iran controls Lebanon fully now. As president will now sit a strong ally of Assad and Iran, and as prime minister will sit a semi-paralyzed, looking-over-his-shoulder-man whose father was murdered by Assad and Hezbollah.

On another note though, Hariri knows that Michel Aoun is unfit to be the next president of Lebanon. This propsal, in his mind, averts a disaster.

It is no less startling because of the backing it would require from Saudi Arabia and Iran, rival states that wield decisive influence over Lebanon’s competing factions and which are in conflict elsewhere in the region, including in Syria.

For both Saudi Arabia and Iran, such a solution limits the risks involved in both countries involved against each other on two fronts in Syria and Yemen. Leaving a third front to chance was too risky.

However, as the war escalates in Syria, with Iran and Saudi Arabia increasing their support for Assad and his enemies, a new deal for Lebanon seems unlikely to signal any broader understanding to settle regional conflicts.

But it would point to a desire to preserve a minimal degree of stability in Lebanon. While badly affected by the Syrian war that has triggered militant attacks, driven a million refugees over the border, and fueled a political crisis, Lebanon has avoided the kind of civil strife some had feared.

Lebanon has been the country without a president for 18 months and a unity government led by Prime Minister Tammam Salam is barely functioning. The Hariri proposal is the most serious effort yet to resolve that political stalemate. Iran fully controls Lebanon now.

Ali Akbar Velayati, a top adviser to Iran’s supreme leader who was on a visit to Beirut on Monday said after meeting Salam that hopes for the election of a president had increased.

“We hope to witness in the immediate future the selection and election of a president of the republic,” a statement from Salam’s office quoted Velayati as saying.

But the appointment of Franjieh faces big challenges including resistance from politicians who campaigned against Syrian influence in Lebanon, and winning over other leaders who also covet the post reserved for a Maronite Christian, notably Michel Aoun and Samir Geagea.

If it fails, analysts believe the chances of a settlement will be even more remote, meaning no imminent end to a crisis of government that has in recent months left trash to pile up in the streets and the army without salaries.

Though the proposal has not been made public by Hariri, it has been reported in Lebanon and confirmed by political sources. Franjieh has said the proposal for him to become president is serious, but not official. The deal is expected to include an agreement on arrangements for new parliamentary elections.

The toughest part is winning over other Christians on both sides. Geagea and Aoun are the official candidates of the rival alliances, and a Franjieh presidency risks exacerbating historic rivalries among the Christians.

Hezbollah has repeatedly stated its support for the candidacy of Aoun, 80, its ally since 2006 and head of the biggest Christian bloc in parliament. Yet Franjieh, whose ties to the group are much older, may be a preferable choice for the group as Hezbollah wages war in Syria in support of Assad.

Aoun may yet have a heart attack.

By backing Franjieh, Hariri meanwhile risks fracturing the March 14 alliance which was forged a decade ago out of opposition to Syria in the wake of the assassination of his father, Rafik al-Hariri.

“The ones with a positive view of this settlement argue that a Franjieh presidency will reassure March 8 and Hezbollah, while the presence of Hariri in the palace as prime minister will reassure the other camp. This is what is being marketed behind the scenes,” said Nabil Boumonsef, a political commentator.

“There has already been great damage, particularly in the March 14 camp – more than in March 8 – because Franjieh is the clearest ally of the Syrian regime and the Assad family in Lebanon,” Boumonsef said. Hezbollah was meanwhile like “a father being asked to choose between two sons”, he added.

Franjieh’s ties to the Assad family date to his childhood when his grandfather, the late President Suleiman Franjieh, took him on trips to Damascus to visit his friend, the late President Hafez al-Assad. Franjieh used to hunt with Bashar al-Assad’s older brother, Basil, who died in a 1994 car crash.

He was orphaned in 1978 when a Christian militia attacked his family home in northern Lebanon, killing his father, mother and sister. Geagea has been accused of responsibility for that civil war time attack, though he has denied participating.

Franjieh, 50, featured prominently in the period of Syrian domination of Lebanon that followed the 1975-90 war, serving as a government minister several times. That era ended with the withdrawal of Syrian forces from Lebanon in 2005 following an international outcry at the Rafik al-Hariri assassination.

Franjieh was serving as interior minister at the time.

Hariri, 45, assumed the mantle of Lebanon’s most influential Sunni politician after his father’s death. He left Lebanon in 2011 after his government was toppled by the March 8 coalition. He has made only two, short trips to Lebanon since then.

Boutros Harb, a March 14 politician with presidential ambitions, said he had no personal problem with Franjieh. “But will he bring Baschar al-Assad with him to Baabda Palace, or will he be president for all Lebanese?” he asked on Twitter.

Baabda is the location of the presidential palace.

Speaking last week, a senior figure in Hariri’s Future Movement, his cousin Ahmad al-Hariri, said the only choice for Lebanese was a “brave settlement” to end the repercussions of political “obstruction” which he said had turned into a time bomb, the Hariri-owned al-Mustaqbal newspaper reported.

Franjieh’s candidacy would certainly be welcomed by Parliament Speaker Nabih Berri, a powerful Hezbollah ally who heads the Shi’ite Amal Movement and whose fractious relationship with Aoun is no secret.

Franjieh was seeking to win the support of other Maronite politicians, a senior March 8 politician said. “Saad al-Hariri has turned everything upside down by announcing his support for the candidate closest to Bashar al-Assad and Hezbollah, and has thrown the ball into the others’ court.”

Franjieh told Bassil he still supported Aoun’s candidacy “if there was a real desire to agree on General Aoun”. “But if (Aoun’s) nomination continues simply to obstruct Franjieh’s nomination, this is another matter.”

After Its Secret Side Deals. the IAEA Needs Urgent Reforms
Do Unto Others..
Assad preparing to use Chemical Weapons
Iranian Terror 590