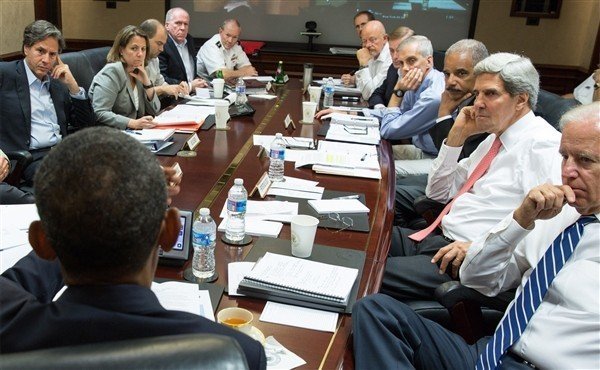 The Ignorant Seven ISIS Helpers in the Obama Administration

May 30, 2015 10:49 pm 2
Paris Attacks Require Planning ISIS Alone May Not Possess
ISIS Trades in Flesh Too, Flesh of the Innocent
ISIS serving Assad

In light of the accusations leveled by Senator Rand Paul against fellow Republicans, we thought we should correct him by listing the real culprits who helped create and forge ISIS by ignoring the Assad violence in Syria. We call them the ignorant seven ISIS helpers in the Obama Administration.

ISIS terrorizing the minorities in the Middle East is the result of one ignorant Syria policy. One that saw the ascent of terrorism to new heights and increased threat levels to America and its interests.

We can blame Baschar al-Assad who freed ISIS Islamists from his jails and who bought oil from ISIS to fund their operations. We can also blame Iranian and Hezbollah terror against Syrian civilians, which drove ISIS to recruit successfully thousands of fighters from some 80 countries from around the world.

But no one is more to blame than Barack Obama and his administration who could have nipped ISIS in the bud had Obama acted with courage and conviction. If Obama had armed the Syrian moderate opposition instead of belittling them, ISIS would not exist today.

Instead, Barack Obama pursued a dangerous Iran Deal that empowered the Mullahs. As a result, they became aggressive animals invading countries and building an arsenal of missiles. All aimed at our allies.

If Obama had supported the anti-Assad moderates who began defecting in September of 2011, ISIS would have never been born.

Because Obama set his core foreign policy goals in the East Wing of the White House, and implemented them with help from the staff in the West Wing, his Secretary of State mostly played the role of a “concierge” carrying messages, initiatives, and orders.

This is why John Kerry did not make the list of the ignorant seven ISIS founders.

At TFS, we assembled a list of the ignorant seven ISIS helpers in the Obama Administration. We believe they are as culprit as Assad was in forging and creating ISIS.

Barack Obama ISIS Founder No. 1
Barack Obama
The U.S. President has singlehandedly permitted ISIS to grow and prosper by ignoring the Assad atrocities, and by not helping the liberal-minded Free Syrian Army who began defecting in the fall of 2011. No words can describe his irresponsible behavior, which have led to heightened terror across the whole region. ISIS terror has already tried to strike us here at home. By far, the worst U.S. President ever when it comes to the conduct of a potent U.S. foreign policy.
Barack Obama
ISIS Helper No. 1
Denis McDonough ISIS Founder No. 2
Denis McDonough
Not only he is second on the list of the ignorant seven who drove ISIS to become such a threat, but he is the number one enemy of the Syrian people for constantly advising the U.S. President not to interfere in Syria, help its people protect themselves from chemical attacks, or build a no-fly zone to aid civilians. Denis McDonough is as responsible as Assad is in the death of 600,000 Syrians. History will not be kind to his ignorance.
Denis McDonough
ISIS Helper No. 2
Gen. Martin Dempsey ISIS Helper No. 3
Gen. Martin Dempsey
In 2011, when Gen. Dempsey was asked to propose what it would take to establish a no-fly zone in Syria, he provided an inflated number of 70,000 U.S. troops because he did not want the U.S. to help Syrians protect themselves from the Assad atrocities. This gave rise to ISIS. To this day, he still opposes assisting the Syrian moderate opposition or intervene in Syria. He will go down in history as the worst JCS because under his watch terror increased exponentially.
Gen. Martin Dempsey
ISIS Founder No. 3
Ben Rhodes ISIS Helper No. 4
Ben Rhodes
At the age of 37, Ben Rhodes is way over his head setting policy in the turbulent Middle East region. What is a Masters degree holder in "short stories" doing running one of the most complex jobs in the world, in the most troubled regions of the world? After almost seven years of disasters, Ben Rhodes has learned nothing from his mistakes because he keeps tweaking the same fallacies hoping for better results. ISIS filled the vacuum he created with his shortsightedness and foolishness.
Ben Rhodes
ISIS Founder No. 4
Susan Rice ISIS Helper No. 5
Susan Rice
Ambassador Susan Rice does not have enough experience in foreign policy to understand her limitations. She is there to support Barack Obama not to question his judgment, which makes her as responsible as Obama is in the rise of ISIS and terror in general. Of all the other advisers, Rice is the least capable.
Susan Rice
ISIS Founder No. 5
Valerie Jarrett ISIS Helper No. 6
Valerie Jarrett
Although you rarely see Valerie Jarrett in the situation room setting policy (She sets policy secretly in the East Wing), she is the main architect behind Obama's detente with Iran. Syria, as far as she is concerned, stands in the way when it comes to Obama's US-Iran deal. Therefore, neglecting Syria and the problems her neglect has caused have led us to the rise of terror and ISIS.
Valerie Jarrett
ISIS Founder No. 6
Joe Biden ISIS Helper No. 7
Joe Biden
Vice President Joe Biden goes along to go along. When it comes to Syria, he has been amiss in advising Barack Obama about the pitfalls of his policy. His absence is irresponsible. His absence makes him another ISIS helper because of his blind support of Obama's detrimental policies. Compare the affable Joe Biden to Dick Cheney who did not shy away from pressing other cabinet members and WH staff if they went astray. VP Biden is almost useless.
Joe Biden
ISIS Founder No. 7

ACCOLADES FOR SOME OFFICIALS

Conversely, there were cabinet members, policy makers officials, and Senators who tried hard to warn the president about the bad results his Syrian policy would yield. Had they succeeded, we would not be writing about the ignorant seven ISIS helpers today.

Accolades to all those who worked in the Obama Administration, the Senate, or the U.S. State Department who saw ISIS coming and tried to override the ignorant seven ISIS helpers above.

They all pressed The White House to act decisively in 2012 to arm the moderate Syrian opposition to stop the Assad genocide. In the case of Senators McCain and Graham, their constant advice to change course was ignored at every turn.

At every turn, the ill-equipped Denis McDonough and Ben Rhode were able to block their influence and drive the Syrian policy towards the disastrous outcome we see today with over 300,000 people dead and millions of refugees.

The accolades go to:

At least history will prove them right.

The Ignorant Seven ISIS Helpers in the Obama Administration