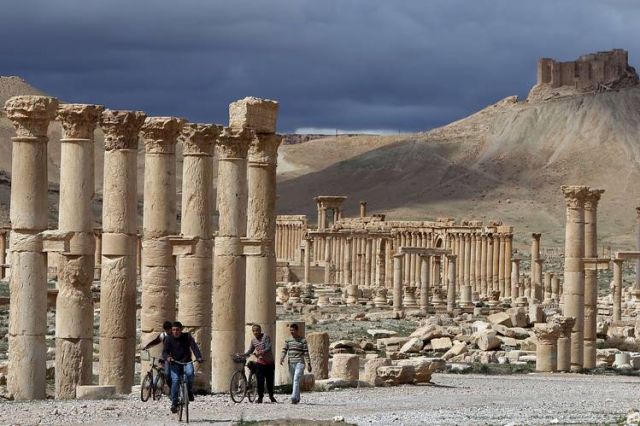 The ISIS savages are beginning to destroy the beautiful and ancient city of Palmyra (Called Tadmur in Syria).

The report was the first of any damage being done by the the ISIS savages to buildings in Palmyra since they seized control of the city, also known as Tadmur, in May. Syrian forces have bombed the city, and the militants camped within it, since then.

Before-and-after pictures showed several ISIS savages carrying explosives and the shrines, which are not among the city’s monumental Roman-era buildings, reduced to rubble.

Syrian activists on the ground inside Syria said this week that the militants had planted mines in Palmyra but that it was not clear whether it was preparing to destroy the site or wanted to deter government forces from advancing towards it.

“In all the areas where they spread when they see tombs they destroy them as see them as sacrilegious and a return to paganism.”

Hundreds of statues had been moved from the city to safe locations, before the ISIS savages, who control large swathes of Iraq and Syria, took over, the Syrian responsible for antiquities told Reuters.

Furthermore, the ISIS savages have blown up dozens of shrines in Iraq and Syria, many belonging to the Sufi sect, a mystical school of Islam opposed by puritanical Salafists from which Islamic State and al Qaeda draws many of its fighters.

ISIS began forming when the Assad regime began releasing hardcore Islamists from its prisons to create an unacceptable Western opposition to his rule. With a strong ISIS, Assad could claim he is the best alternative.