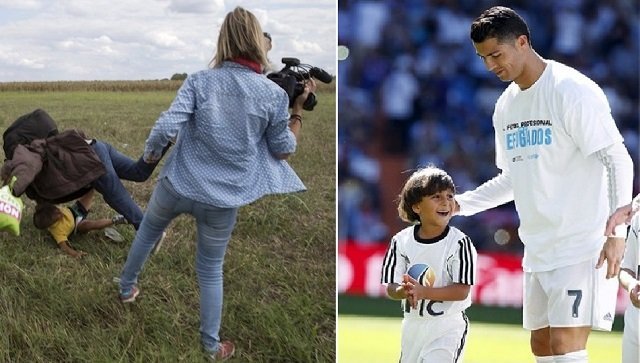 September 21, 2015 12:32 pm 0
Sign Petition to Stand Up For the Children of Syria
The contagious madness of the new politically correct
Jared Kushner Anti-Israel Actions

When a far-right Hungarian camerawoman named Petra Laszlo tripped a Syrian refugee carrying his 7-year old son, she did not realize how big a favor she did this family.

The media got to meet Osama al-Mohsen who informed them of his coaching career. The next thing, the Spanish Football academy CENAFE, through Luis Miguel Pedraza, offered him a job as a coach. Is this a Cinderella story or what? Before that offer, al-Mohaden could have one of hundreds of thousands of refugees languishing without a job or a future.

Thank you Espana for your kind gesture. Thank you CENAFE for giving this Syrian refugee a new start for a new life.

That was not enough though. Below is a story CNN published that should make everyone melt.

In another touching development in the story of the Syrian migrant tripped by a Hungarian journalist, his young son received the acclaim of thousands of football fans in the Spanish capital, as he was led on to the pitch by Real Madrid superstar Cristiano Ronaldo.

Earlier this month, Osama Abdul Mohsen was running through a field close to the Hungarian border, carrying his eight-year-old son, Zaid, when he was tripped by camerawoman Petra Laszlo. The video of the incident sparked international outrage and Laszlo was fired by her network.

Last week, it was revealed that the father and son were offered a new life in Madrid after a football academy offered Mohsen — a former coach — a job and a place to live.

At the weekend, ahead of Real Madrid’s league match with Granada, Zaid appeared dressed in football kit as a mascot. He was given a round of applause by the crowd as he walked out of the tunnel with Ronaldo at the 81,000-capacity Santiago Bernabeu stadium.

All of the Real players wore T-shirts showing support for the refugees. The Spanish club has announced it will donate 1 million euros ($1.13 million) to ease their plight.

Mohsen and his son were fleeing a Hungarian holding camp when the incident with Laszlo happened. He said the stampede from the camp was triggered by the migrants’ desperation. Thousands were packed into a small area, some with tents, but many others with no shelter,Mohsen told CNN earlier this month.

He and Zaid — whose hometown in Syria has been taken over by ISIS — spent only one night in the camp, sleeping on the ground, but others had lived in those conditions for weeks.

“This caused anxiety and weariness to many migrants,” Mohsen said. “The indifference of the Hungarian authorities triggered the situation, causing the migrants to storm the police defenses and walk their way to the nearby village, around 3 to 5 kilometers away.”

Their plight made an impression on Miguel Angel Galan, the owner of a football academy in Madrid. He decided to contact a Spanish journalist in an attempt to find the father and son.

The journalist — Martin Mucha — traveled to Munich, Germany, where thousands of refugees were arriving daily. With the help of Arabic-speaking footballer Mohamed Labrouzi, he eventually found them. Mohsen was startled as Mucha explained that the head of a football academy in Spain wanted to help them.

Within hours father and son were facing the Spanish media in Madrid. Luis Miguel Pedraza, of the CENAFE football school said Wednesday: “We’re giving him a hand as a humanitarian gesture. Later we’ll look for something. He’s interested in our school. The first thing is to get him settled.”

The school will help Mohsen, Zaid and other members of their family apply for asylum and move them into a house in Getafe, where they will pay for the family’s living costs, until they can support themselves.

This moment will always be engraved in the memory of 7-year old Ziad al-Mohsen. Thank you Espana for your generosity and kindness. Thank you Ronaldo.

While Paranoia Strikes America, Syrian Refugees Show Grace
Thank You Greece
Assad Alternative Only Trump and Putin Can Agree Upon
Things That Matter 382