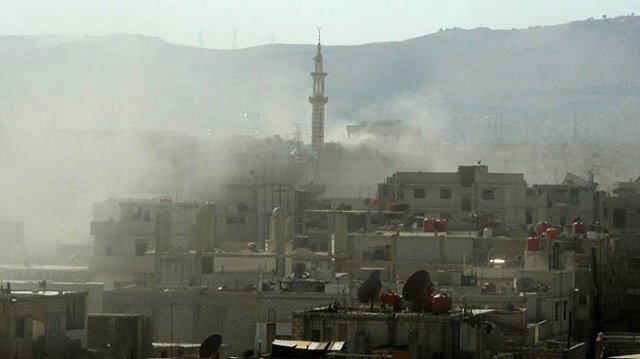 Did Putin really expect he could arm the mass murderer Assad without a price? If he really wanted to defeat ISIS, he should have joined the US-led coalition, and every anti-terror Syrian would have cheered him on. Putin, instead, invaded Syria to exacerbate the Syrian refugee problem and to accelerate the killing of Syrian civilians.

“A shell fell on the territory of the Russian embassy in Damascus on September 20 around 9:00am, going deep into the ground without causing damage. We … condemn the criminal shelling of the Russian diplomatic presence in Damascus. We await a clear standpoint on this terrorist act from all members of the international community, including regional actors.”

“What is needed is not just words but concrete action, the shelling of the Russian embassy was done from the direction of Jobar, where the anti-government militants are based.”

The militants have “outside sponsors” who are responsible for influencing their actions, the foreign ministry said. Syrians consider Russia an outside sponsor too.

The Russian embassy in Damascus’ Mazraa neighborhood had been hit by shells on prior occasions. In May, one person was killed by mortar rounds that landed nearby. Three were hurt when mortar rounds landed inside the compound in April.

The United States has accused Russia of recently deploying troops, artillery and aircraft to the war-torn country, ratcheting up fears Moscow may join in the fighting alongside its old ally Assad.

Moscow has insisted it is only fulfilling long-standing military contracts and is currently on a diplomatic push to get a U.S.-led coalition of Western and regional powers fighting the Islamic State group to join forces with Assad against the jihadists.

Open Letter to Syrian Foreign Minister Walid al-Moallem
Watch What Happens When You Kill Americans
Do Unto Others..
Syria News 1213 Syrian Revolution 1335