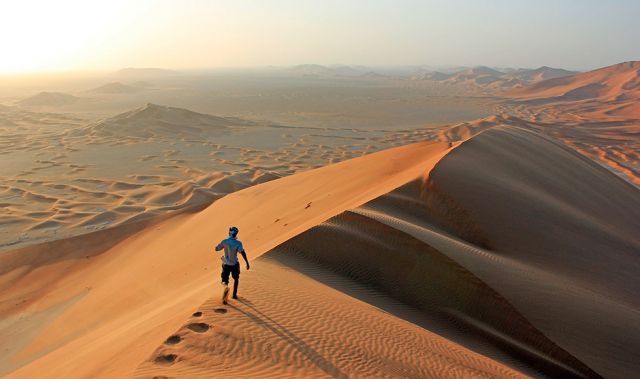 Test a Nuke in Rub’ al-Khali

Because President Obama does not understand the consequences of negotiating a bad deal with Iran that would proliferate nuclear power in the region, we think it is time for the Saudis to test a Pakistani nuke in Rub’ al-Khali, the largest sand desert in the world, to shake Mr. Obama from his slumber.

Sabotaging these talks is now a duty of every Arab country fearing the savages ruling Iran.

When President Obama came to power, one Muslim country possessed a nuclear arsenal. At this rate, by the time he leaves office, there will be three Muslim countries with nuclear bombs, two of which have been feuding for over 1,400 years, the longest feud in human history. That feud was re-ignited in Syria because Mr. Obama permitted the Assad regime to survive. Does the President of the United States truly understand his responsibilities as the leader of the free world?

A test by Saudi Arabia in Rub’ al-Khali in response to the President’s refusal to disarm Iran by force will shake the world. There is always the possibility Iran may use this test as an excuse to pursue openly a nuclear weapon, which may prompt Mr. Obama to finally act to stop Iran. If not, the Saudis will have to lay their conditions to disarm, which include at the top of the list more drastic sanctions against Iran, not less as Obama envisions.

There is no doubt the President has immense powers, but so do the free willed countries sensing the danger of his powers against their own self-interests.

The question becomes can Pakistan test such a device soon in Rub’ al-Khali? Can Pakistan under the international treaties it signed find some loophole to stop Iran from building its own nuclear arsenal?

President Obama is following a script that historically yielded nothing but failures (Remember Jimmy Carter’s 1994 deal with North Korea?). It is no longer enough, however, to point to history to stop irresponsible and stubborn men. One has to shake the foundation from under their feet to force them to calculate the consequences of their terminally ill policies.

One little tip Mr. President: Countries that truly seek peace do not use pregnant women as target practice by their snipers or terrorize others to gain an advantage.

Test a Nuke in Rub’ al-Khali

Survey: 2/3 of Natsec Pros Give Iran Deal Thumbs Down
It is not about domestic terror, it is about international terror
Between Spilling and Containment of the Syrian Civil War
Support U.S. Allies 152 Western Appeasement 483