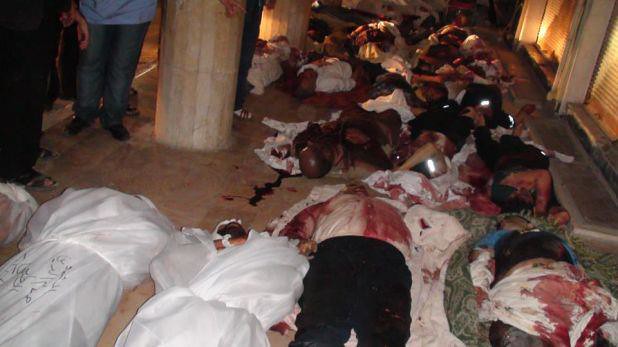 October 24, 2012 1:33 pm 0
It’s not About the Arab Spring, It’s About Obama’s Policies
Assad and Muslim Brotherhood: Both Claiming al-Qaeda in Syria
A Syrian’s Cry for Help

The Assad regime continues its killing spree against the hapless and the helpless. Among his latest crimes, Assad massacres 25 women and children in Douma. Then accuses the rebels for the crime.

Reuters published this report this morning:

“There was a horrible massacre in Douma last night,” the media office of the opposition network in Douma said in a statement. “More than 20 civilians have been slaughtered by (pro-government militia) shabiha who were at a checkpoint and then stormed into a residential building nearby.”

Mahmoud Doumany, an activist living in Douma, said that he had the names of 20 of the dead but that 10 were too disfigured to be identified.

“People now are scared and very angry. Some of the martyrs were killed with knives, others were shot,” he told Reuters.

Opposition video showed images of corpses wrapped in blankets and of the bodies of women and children, one of whom had a hole in his head and another had part of his face missing.

Of course the Assad regime blamed his crimes on those who have taken it upon themselves to protect the civilians.

Massacres that include killing Sunni women and children are part of a larger ethnic cleansing campaign. One that Assad, Hezbollah, and Iran are conducting in daylight and under the nose of the international community.

Be they Shiite or Sunnis, killing innocent civilians is a crime against humanity. The United Nations, the world relies upon to resolve global conflicts, is utterly impotent in this area. Dictators across the world kill at will. And unless there is a consensus among the five countries with veto powers to prosecute them, they usually escape culpability and accountability.

Assad is the poster child representing the United nations impotence.

Russia and China protect the Assad killing machine. Russia because it installed the Assad family to rule Syria. China because it takes anti-American positions any chance it gets.