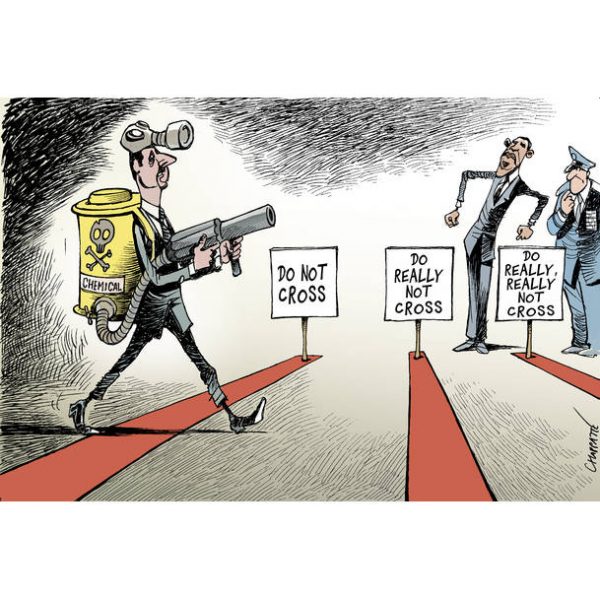 A Tale of Immoral Red Lines

September 11, 2012 1:16 pm 2
CIA Payback for Assad Rendition Services
Assad Sentencing Another Assad? Are You Kidding?
An Internal Alawite Coup in the Making?

The Obama administration has shifted its Syrian foreign policy from a “Do Nothing” policy to a hybrid “Do Nothing, Just Red Line” policy. How Obama has applied this policy is worthy of our attention. This is the tale of immoral Red Lines.

On Syria, Obama has warned Assad that the movement or use of chemical weapons constitutes a red line for his administration and reason enough for the US military to take action against his regime. The President uttered this new hybrid policy on August 20 during a quickly organized press conference at the White House.

No doubt, Syrians are relieved by these words if the President means them. In addition to be ready to stare Assad in the eyes with Drones and Stealth. But what Obama unleashed may have been the worst Syrians could expect. By defining his red line, Obama has tacitly given Assad the green light to kill at will as long as he does not use chemical weapons. The wimpy Barack Obama weaved this tale of immoral red lines.

According to daily casualty statistics compiled by the Local Coordinating Committees inside Syria, between August 13 and August 20, there were 1,291 Syrian casualties in total. But after President Obama drew his red line on August 20, 1,974 casualties were recorded between August 21 and August 28. That’s a 35% increase in casualties, which also saw the Darrya massacre on August 25 where Assad massacred 440 more Syrians.

Obama’s red line delivered 35% more deaths to Syrians than before. Assad interpreted his red line to mean he can kill at will using only conventional weapons. Did the President try and stop the carnage? Not one word from him since then about the savagery of Assad. How could any Syrian misinterpret his words as not encouraging more death and destruction? Especially, when the President turned a blind eye to Assad bombing civilian targets with Russian MIG’s? And to this day Obama feels no remorse or moral obligation to stop the carnage he further encouraged in the first place. Just because of his choice of words.

When it comes to saving lives, President Obama has no red line to administer.

Consider what the Arabs in the Gulf and the Israelis may face as a result of President Obama’s continual refusal to draw a red line against Iran or contemplating one even though an Iranian nuclear device may cause more casualties and more deaths than anything else imaginable. President Obama’s red lines are not intended to save lives, just the opposite; in Syria his red line has increased death and destruction and without a well defined red line against Iran, the President may unleash even more death and destruction.

Imagine for a moment how bizarre a foreign policy is when it delivers death against potential new allies? Imagine, as well, that it may deliver exponentially more death and destruction against natural allies.

That’s exactly what happens when our Commander-in-Chief shrinks from his responsibility to defend the free world from despotism.

A Tale of Immoral Red Lines