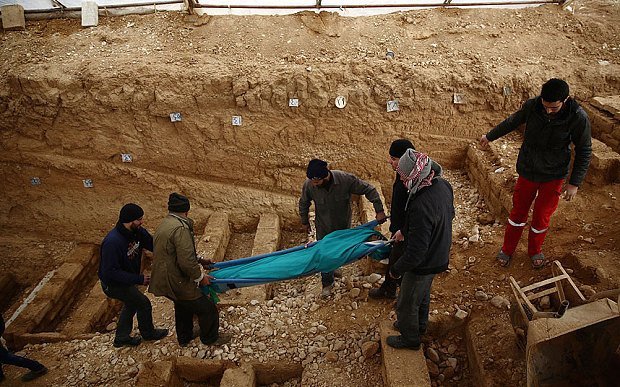 January 8, 2016 4:57 am 0
The Russians are Humiliating America Comfortably Because Americans Elected President Bambi
Russia Continues to Strike the Moderate Opposition, Not ISIS
Russia, Light on Cash, Weighs Risks of a Heavy Tax on Oil Giants

In the Syrian town of Douma, no one dares remove the bombs which litter the school playground.

The cluster bombs, reportedly dropped by Russian war planes, struck on December 13, heralding one of the bloodiest days residents can remember.

Of the 60 civilians who died, eight were children. Another was the headmistress who ran out to save them.

“The regime is trying to drain the life from our town,” said Mohamed Abdel Rahman, a French teacher who dug bodies from the rubble of two different playgrounds that day. “Schools are closed until further notice.”

Perched on the eastern edge of Damascus, Douma is no stranger to carnage. The area is controlled by rebels opposed to the Syrian regime, and human rights groups say it has been systematically targeted by forces loyal to the country’s president, Bashar al-Assad.

At the end of September, Russian war planes joined that effort. Since then, Moscow has launched air strikes across the country in support of the regime, often at a terrible cost to civilians.

Two days of attacks on December 13 and 14 attacks involved cluster munitions, weapons so dangerous that they have been banned by 118 countries.

Cluster munitions are containers that explode in the air to distribute smaller bombs over a large area.

Although Russia has strongly denied their use in Syria, new research suggests cluster munitions have been deployed extensively.

Conflict Intelligence Team, a group of bloggers and activists who specialise in monitoring Russian military operations abroad, said on Thursday that it had identified three models of cluster munition at the Hmeymim air base, where Russia’s air contingent in Syria is based.

“Contrary to the claims of Russia’s Ministry of Defense, various types of cluster bombs are present at Hmeymim airbase,” the report said. “Based on our investigations, it is highly likely that Russian airstrikes in Syria indeed lead to damage of civilian facilities and civilian casualties.”

Mohamed Saleh, a father of two who sometimes helps the Douma rescue teams, said: “The fear is as sharp as it ever was. When I see my children playing, I pray to God they won’t end up under that rubble.

“If the world thinks we are used to these attacks by now, they are wrong.”

With Syria’s war approaching a fifth year, the impact on its children is incalculable. Injury is rife, trauma is common, and school enrolment rates have plummeted to 50 per cent nationwide. In the shattered city of Aleppo, that figure stands at just six per cent.

At least a quarter of Syria’s schools have been damaged or destroyed, used for military purposes, or occupied by displaced people. Others are deserted as parents keep their children out of school, fearing attacks.

In the Douma schools that continue to function, lessons have changed almost beyond recognition. Teaching materials are in short supply and heating the rooms is difficult due to widespread fuel shortages.

The autumn term lasted just 30 days before regular shelling made attending class too dangerous. Lessons began and finished early – usually running between 6am and 9am – and break times, when students could gather in sight of regime air craft, were cancelled altogether.

On the morning of December 13, locals believe the school was targeted as its students made a rare appearance in the playground after an end-of-year exam.

When the shelling started, the headmistress rushed to bring them inside but she was hit by a shell and died immediately,” said Yasser Brkhc, Douma’s director of education. “After she was martyred, the situation spiralled out of control. There was a raid every 12 minutes, so the ambulance couldn’t go to rescue the girls and the teachers for long time.”

Save the Children estimates that it may cost as much as £2 billion to replace Syria’s damaged, destroyed or occupied schools. According to the group’s figures, the long-term impact on Syria’s economy of 2.8 million Syrian children never returning to school could equate to almost £1.5 billion annually.

“We live a struggle everyday, asking whether to send our children to school and risk death, or to keep them home so they lose their education,” said Abo Majed, whose son attended one of the schools that has attacked on December 13.

Before the war, Mr Abo Majed ran a welding workshop. “Parents used to work hard so at least they could give their children a good education,” he said. “Now, we suffer without hope.”