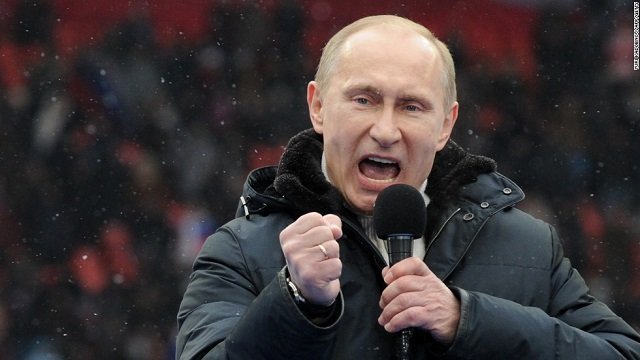 October 23, 2015 6:45 am 0
Stirrings of Labor Unrest Awaken as Russia’s Economic Chill Sets In
If Russia Invaded Syria, Why Not Turkey?
Early UN Halloween’s Trick or Treat for Syria

TFS Note: We are on the brink of World War III thanks to the Strategic Patience bulls***t of Barack Obama.

Al-Rai says Putin vowed to retaliate against anyone providing MANPADs to rebels.

Vladimir Putin told Bashar al-Assad during their meeting in Moscow that Russia was prepared to strike any country that provides man-portable air-defense systems to Syrian rebels, according to a Kuwaiti daily closely following Moscowâ€™s military intervention on behalf of the Syrian regime.

â€œRussia used cruise missiles [against rebels] to confirm to all players on the ground in Syria that [Moscow] will target everyone who supplies extremists with missiles that affect Russian planes,â€ Al-Rai quoted Putin as saying during his Tuesday sit-down with Assad.

A close confidante of Assadâ€”who spoke on condition of anonymityâ€”also told Al-Rai that Putin had emphasised his readiness to retaliate against anyone threatening his countryâ€™s forces in Syria.

â€œEvery state that supports the militants in a way that endangers Russian forces will be a legitimate target for us,â€ the Russian president allegedly said.

During the meeting, Putin also reportedly explained that his country had â€œaltered its foreign policyâ€ and now aims to â€œequal to the role of Washington at the height of its power, not today.â€

â€œThe United States is regressing noticeably,â€ the daily quoted him as saying.

Since Russia began its aerial bombardment campaign in Syria on September 30, rebels have pleaded for the provision of MANPADs to strike Russian fighter jets.

However, reports indicate that the US is unwilling to supply rebels with the anti-aircraft weapon system.

â€œAssad said that the battle fronts do not need Russian ground [forces] because the Syrian armyâ€™s current numbers have increased as a result of the confidence that has returned to its ranks since Russiaâ€™s intervention,â€ Assadâ€™s confidante told the Kuwaiti daily.

â€œAnd that goes without mentioning the force made up of regional allies supporting the Syrian army, who are fighting side by side [with it] to wipe out the terrorists,â€ the sources quoted Assad as saying during his Moscow trip.

Hezbollah and Iran have reportedly deployed a large number of their troops fight alongside regime soldiers in northwest Syria, with reports emerging of mounting casualties among both foreign fighting forces outside Hama, Latakia and Aleppo.

â€œPutin immediately gave orders to his defense minister Sergey Shoygu, [telling him to] work on increasing Russian strikes and air support, and to supply the Syrian army with all the T-72 tanks and new combat vehicles it needs,â€ the report claimed.

According to the source, Putin also instructed Shoygu to supply the Syrian army with â€œhigh-tech electronic devices that monitor all projectiles passing through the air and give coordinates to the army so that it can respond instantaneously.â€