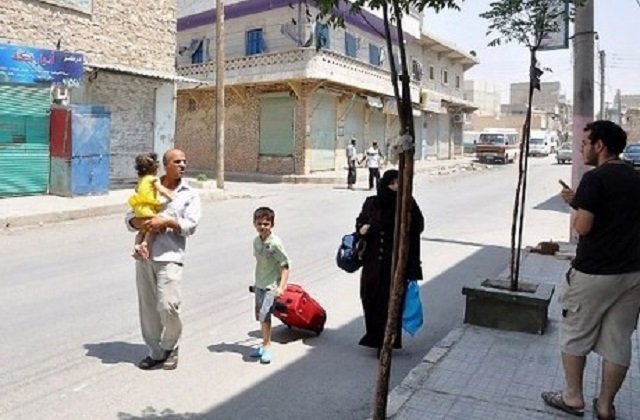 Government and rebel-held parts of Syria’s Aleppo have been without safe water for nearly three weeks because the war-torn city’s only pumping station is not functioning, residents said Thursday.

The cause of the problem is disputed, with some residents saying a lack of fuel was the issue, but a monitor reporting that the opposition group controlling the facility had shut it down.

“There is a water crisis in the whole city,” said Mamun Abu Omar, head of a pro-rebel press agency.

“All our water was from the Euphrates River. The pumps would bring it in, filter it, and it would reach Aleppo’s residents,” Abu Omar told AFP.

But for the past 20 days, residents have been forced to purchase individual cisterns of unfiltered water.

“The water from these cisterns isn’t healthy — it’s often uncovered and exposed to the air,” Abu Omar said.

According to activists on the ground inside Syria, people were drawing water from wells.

An AFP journalist in Aleppo city said the water had caused rashes and cases of poisoning among inhabitants.

In a video filmed by activists, a man identified as a doctor said that residents were suffering gastrointestinal infections after drinking “unsafe” water.

“Water from the wells is not safe to drink, and it’s often polluted with insect waste,” the man said.

Once Syria’s commercial hub, Aleppo city has been divided between government control in the west and rebel control in the east since shortly after clashes there began in mid-2012.

Due to heavy regime bombardment of rebel-held neighborhoods and fierce clashes in the city, Aleppo’s electricity infrastructure has been severely damaged.

As a result, the city’s sole water pumping station now relies on diesel rather than electricity to distribute water.

Residents told AFP that the al-Qaida-affiliated al-Nusra Front group controlling the Sleiman al-Halabi pump says it has run out of diesel to operate it.

But activists said the group was trying to pressure the government to restore electricity.

“They have issued a list of demands, including constant provision of fuel from the Red Crescent, but mainly they want the regime to provide electricity to all of Aleppo city,” they said.

Mohammed al-Khatieb, an activist speaking on the Internet from Aleppo, said an initiative by a neutral grouping of residents was trying to resolve the issue.

Doctors Without Borders (MSF) said a fuel blockade by the Islamic State group was hindering the work of health facilities and health organizations in Syria’s north.

Russian Troops Geolocated in Aleppo, Hama, and Homs
The Cleverest Move Yet by Ambassador Robert Ford
You Want to Fight in Syria? Learn the Sign Language
Syria 450