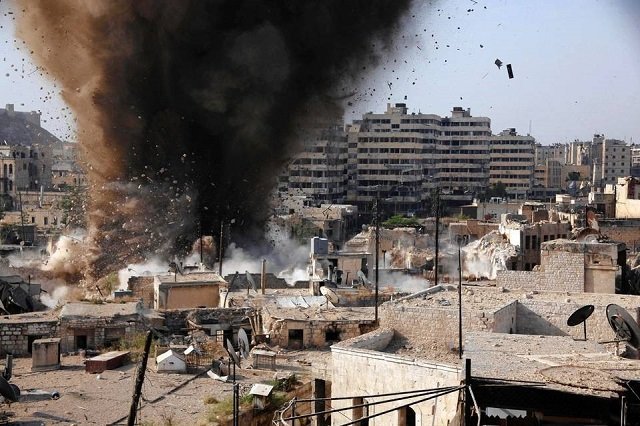 July 17, 2015 6:49 am 0
Another Setback for Assad Forces in Syria. Are Gas Attacks Next?
Islamic State Blows up Gas Pipeline to Capital Damascus
Syria’s Gas Attack on Civilization

The nuclear deal with Iran will stoke more Sunni-Shiite violence, and the Saudis may go shopping for nukes.

While President Obama hopes his nuclear deal with Iran will burnish his presidential legacy as a great peacemaker, the near-term consequence will be more—and even bloodier—sectarian violence in the Middle East. In particular, security threats will escalate for Saudi Arabia and Israel, until now America’s two major Mideast allies.

The Israelis and Saudis, longtime adversaries, in recent years have joined in vehement opposition to Mr. Obama’s attempts to negotiate a nuclear deal with Tehran. For the Israelis the concern was entirely about an Iranian atomic weapon. But for the Saudis the fear was less about future nuclear capability than about the real and present threat that a deal would further enhance Iran’s regional stature and its capability to ratchet up the regime’s exploitation of regional sectarian divisions.

That nightmare has arrived. The immediate threat to Saudi Arabia far exceeds that to Israel, which (without saying so) already possesses nuclear weapons and in a real crisis can almost surely be more confident of U.S. support—from future American presidents, if not the current one—than can Saudi Arabia. Furthermore, Sunni Saudi Arabia, not Jewish Israel, is Shiite Iran’s primary rival for regional hegemony.

Under the deal announced Tuesday, Iran stands to have $100 billion of assets unfrozen by late this year. That, coupled with the bizarre U.S. decision to unfreeze the ban on selling Iran conventional weapons and ballistic missiles down the road, means that Tehran can use those billions of freshly available assets not to enhance its economy, as the Iranians promised negotiators, but rather to buy deadly new arms for its nefarious partners across the region. These include Shiite militias in Iraq, Syria’s Bashar Assad, Hezbollah in Lebanon and Syria, and the Houthi rebels in Yemen.

A cocky, conventionally armed Iran increasing regional mischief-making puts Saudi Arabia in the cross hairs—of Iran, but also of Islamic State in Iraq and Syria (ISIS). As Iranian-backed Shiites across the region increase efforts to exploit turmoil in failing Mideast states for Tehran’s benefit, so too will their Sunni opponents in ISIS, who are no friends of the Saudis.

The expansion of Iran and ISIS also means ever-greater internal threats to Saudi stability. Some 60% of the Saudi population is under 30 years old, and unemployment among those young Saudis is about 30%. Saudi Arabia has made it a crime for its citizens to join ISIS, but the Saudi Interior Ministry has acknowledged that in recent years some 2,200 young Saudis have gone to Syria to fight. As Saudi Sunnis watch their Sunni coreligionists being killed by Iranian-backed Shiites across the region with little opposition from any force other than ISIS, that terror organization’s appeal grows, especially among deeply religious young Saudis.

But what are Saudi Arabia’s choices? The short, subdued statement this week by Riyadh’s embassy in Washington again calling for “strict, sustainable” inspections speaks volumes about the kingdom’s precarious position and its lack of good options. The deal obviously comes as no surprise to the Saudis, who have watched the Obama administration fervently court Iran at Saudi expense. Given that the kingdom already has taken any number of actions to try to protect itself, few remain. So don’t expect any significant Saudi action in the short term, not even openly lobbying Congress against the deal.

Already, Riyadh has reached out to a broader range of countries, sending its top officials to China last year and Russia last month. Only last week, the kingdom’s young deputy crown prince boarded a U.S. aircraft carrier in the Persian Gulf to keep alive the impression, however dubious, that Saudi Arabia still can count on the U.S. for protection.

The kingdom has become more assertive on its own behalf, though this can easily be overstated. Saudi efforts to confront Syria’s Assad have been mostly unsuccessful, and as Iran gains the freedom under the nuclear deal to buy and share new conventional armaments, overthrowing the Assad regime will be ever harder. Riyadh’s bombing campaign against what it sees as an Iranian-backed insurgency by Houthi tribesmen in Yemen has killed more than a thousand civilians but failed to achieve the Saudi goal of restoring Yemen’s deposed president.

One semi-successful action by the Saudis: increasing their oil production to put pressure on an Iranian economy already staggering under economic sanctions from the U.S. and Europe. This month the Saudis have been pumping 10.6 million barrels of oil a day, a historic high.

A final option open to the Saudis: Get a nuclear weapon as soon as possible. Prince Turki al Faisal, the kingdom’s former head of intelligence, vowed in the spring that “whatever the Iranians have, we will have.” The kingdom doesn’t have the technological ability to build its own nuclear program and is more likely to lobby Pakistan—whose nuclear development the Saudis helped fund—to establish a weapons program on Saudi soil. But Pakistan’s nonproliferation commitments make that solution less likely than many Saudis like to pretend.

So, while the nuclear agreement is being cheered in Tehran, while Obama aides are fist-pumping in the White House, while Europeans are salivating at the prospect of doing business in Iran, and while the Israelis are trying to lobby the U.S. Congress against the deal, the Saudis are left grinding their teeth in Riyadh, surveying a bleak future and no good options to change it.

Ms. House, a former publisher of The Wall Street Journal who won a Pulitzer Prize as a reporter for her coverage of the Middle East, is the author of “On Saudi Arabia: Its People, Past, Religion, Fault Lines—and Future” (Knopf, 2012).