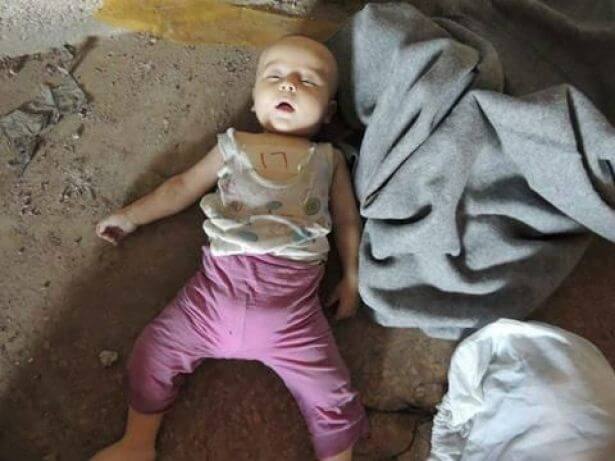 It takes a barbarian to employ poison gas. Assad joins the ranks of Mussolini, Hitler and Saddam Hussein.

‘Gas! Gas! Quick, boys! An ecstasy of fumbling, fitting the clumsy helmets just in time; but someone still was yelling out and stumbling, and flound’ring like a man in fire or lime . . . .”

Wilfred Owen’s poem, “Dulce et Decorum Est,” describing his experience of a chlorine-gas attack in World War I, highlights its horror and explains in part the thinking behind the Geneva Protocol for the Prohibition of the Use in War of Asphyxiating, Poisonous or other Gases, which comprehensively outlawed such weapons in 1925.

Only 4% of all battlefield deaths in the Great War had been caused by gas, yet the foul nature of those deaths meant that gas held a particular terror in the public imagination. Since 1925, it has only been countries that are recognized to be outside the bounds of civilization that have taken recourse to it.

The latest outlaw to do so is Syria’s dictator, Bashar al-Assad, who deployed chemical weapons against opponents of his regime in the suburbs of Damascus on Aug. 21, according to press reports and a statement over the weekend by Doctors Without Borders.

The first was Benito Mussolini’s Fascist Italy, which unleashed mustard gas on the Ethiopian subjects of Emperor Haile Selassie in the Abyssinian campaign of 1935-41. The gas dropped by the Italian air force was known by the Ethiopians as “the terrible rain that burned and killed.”

The horrific results wrought upon unarmed civilians, photographed by the International Red Cross, were much the same as Wilfred Owen described in his poem about a comrade on the Western Front who had failed to put his gas-mask on in time: “Dim, through the misty panes and thick green light, as under a green sea, I saw him drowning. In all my dreams, before my helpless sight, he plunges at me, guttering, choking, drowning.”

Although both the Axis and Allied powers in World War II considered using poison gas, neither did, possibly through fear of retaliation. Adolf Hitler did use gas to perpetrate his Holocaust against the Jews in Europe. But he did not unleash this weapon on the battlefield””not even on the Eastern Front, where he considered that he was fighting against Slavic untermenschen (sub-humans).

His hesitation to use gas on the battlefield was not due to the fact that he had himself been gassed in the trenches of World War I, but because he rightly suspected an overwhelming Allied response to any first use of such a weapon. Winston Churchill actively considered using poison gas both defensively””in June 1940, when Britain faced invasion””and offensively, in July 1944, to aid the attacks on the Ruhr. Fortunately, no invasion came in 1940, and in 1944 he and the British chiefs of staff decided against the use of poison gas, putting moral considerations above the undoubted military benefits.

A soldier succumbs to poison gas in France, 1918.

In the Korean War, the Chinese and North Korean intelligence services alleged that the United States had used aircraft to drop flies, fleas and spiders infected with anthrax, cholera, encephalitis, plague and meningitis in “germ bombs.” In January 1998, documents in the Russian presidential archives conclusively proved that the charges were entirely fraudulent””invented as a way of blaming America for outbreaks of these infectious diseases in their own countries.

Some Marxist fellow-travellers in the West, such as the British academic Joseph Needham, promoted these foul libels, but even they””and, significantly, the disinformation machines of Beijing and Pyongyang””never went so far as to accuse the U.S. of using poison gas. They recognized that no one would believe that United Nations forces in Korea would be so barbaric as to resort to such weapons.

In 1987 and 1988, Saddam Hussein launched attacks on no fewer than 40 Kurdish villages in northern Iraq, using new mixtures of mustard gas and various nerve agents such as Sarin, Tabun and VX. (Ten milligrams of VX on the skin can kill a man, while a single raindrop weighs eighty milligrams.) The worst attack came on March 16, 1988, in Halabja.

Iraqi troops methodically divided the town into grids, in order to determine the number and location of the dead and the extent of injuries, thereby enabling them scientifically to gauge the efficacy of various different types of gases and nerve agents. One of the first war correspondents to enter the town afterward, the late Richard Beeston of the Times of London, reported that “Like figures unearthed in Pompeii, the victims of Halabja were killed so quickly that their corpses remained in suspended animation. There was a plump baby whose face, frozen in a scream, stuck out from under the protective arm of a man, away from the open door of a house that he never reached.”

Between 4,000 and 5,000 civilians, many of them women and children, died within a few hours at Halabja, through asphyxiation, skin burns and progressive respiratory shutdown. However, a further 10,000 were “blinded, maimed, disfigured, or otherwise severely and irreversibly debilitated,” according to a report by the University of Liverpool’s Christine Gosden.

These victims later suffered neurological disorders, convulsions, comas and digestive shutdown. In the years to come, thousands more, the State Department noted, were to suffer from “horrific complications, debilitating diseases, and birth defects” such as lymphoma, leukemia, colon, breast, skin and other cancers, miscarriages, infertility and congenital malformations, leading to many more deaths.

It takes a barbarian to employ poison gas. Benito Mussolini, Adolf Hitler (with Zyklon B) and Saddam Hussein were three such, and today another is Assad. Yet the Chinese and Russians continue to excuse and defend him, and the White House ties itself into rhetorical knots in order to avoid having to topple him.

It’s true that in this civil war, shrapnel and Kalashnikov bullets have killed many more of the 100,000 Syrians than has poison gas. Nevertheless, it is right that the use of poison gas by Assad be singled out for special condemnation.

Wilfred Owen, who was himself killed a week before the end of the Great War, recalled in “Dulce et Decorum Est” his gassed comrade’s “white eyes writhing in his face, his hanging face, like a devil’s sick of sin” and how he heard “the blood come gargling from the froth-corrupted lungs, obscene as cancer, bitter as the cud of vile, incurable sores on innocent tongues.” There is a long and honorable history of the civilized world treating those dictators who use poison gas as qualitatively different from the normal ruck of tyrants whose careers have so stained the 20th and 21st centuries.

President Obama, who talks endlessly of the importance of civilized values, must now uphold this one.

Mr. Roberts, an historian, is the author, most recently, of “The Storm of War: A New History of the Second World War” (Harper, 2011).