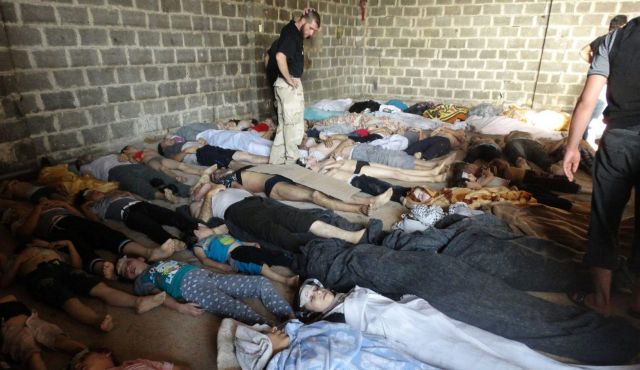 An anonymous and official leaker in Washington read the following from a prepared statement to the NY Times on Sunday:

“… based on the reported number of victims, reported symptoms of those who were killed or injured, witness accounts and other facts gathered by open sources, the U.S. intelligence community, and international partners, there is very little doubt at this point that a chemical weapon was used by the Syrian regime against civilians.”

For those of us who held their breaths quickly and repugnantly exhaled when we heard Washington’s reaction to the fact above:

The Russians weighed-in when their Foreign Ministry proclaimed, after Assad permitted UN inspectors to enter a region he already contaminated over five days of incessant bombardments:

“We strongly urge those who, in trying to impose their opinion on U.N. experts ahead of the results of an investigation, announce the possibility of military action against Syria, to exercise discretion and not make tragic mistakes.”

Evil has won the moment the world permitted Assad to gas his own people. This man of extreme violence should have been stopped.

The Russians, unscrupulous leaders that they are, either appear to have provided the green light for the gas attack or cannot fathom why the world is so angered over the gassing of sleeping children and women. Their Rasputinian attitude is anchored in medievalism. As far as the Iranian regime is concerned, we would not be surprised if the idea occurred to their supreme leader after watching a documentary of Nazis gassing Jewish children and mothers.

There was a day when good prevailed over evil. A day when the United States stood tall by protecting all who needed humanitarian help anywhere around the world. Those days are long gone judging from the negative results of polls in America asking whether the US should intervene to help Syrians, with some 70% of Americans against intervention. Of course, if the pollsters ask the question as if seeking to intervene a la Iraq or Afghanistan, the percentage does not surprise us.

Mind you, if the President wanted to, he could step in front of these polls with the same passion he delivered in a speech on Libya in favor of intervention for humanitarian reasons when Qaddafi had only recorded the massacre of 1,000th victim, as opposed to Assad already with over 110,000 kills.

America is closing its curtains not only on Syria, but also on any compassion towards foreign humanitarian assistance. This new passivity towards the suffering of humanity should be of concern to the whole world. A recent poll found that 40% of Americans would save a dog before saving a foreign tourist. Who would invent such a poll if not someone who believes America has no business policing the world or caring for anyone beyond its shores.

Therefore, get used to it. Evil has won because the new Washington wants to draw the curtains down on decency and correctitude.

Judging from the fact that the only four countries on this planet to ever have gassed their own people are Ba’athist Syria and Iraq (as well as Germany in WWII and Yemen in 1963), and all were run by secular regimes, we have to fight secular terror with the same passion we fight Islamic terror. Evil men justify terror by any means, through any medium or ideology.

Just look at the psychotic Nasrallah, the madman Assad, the lunatic Khamenei, and the screwball Morsi to realize how foolish is this Washington moment to abandon the theater to the evil of these men.