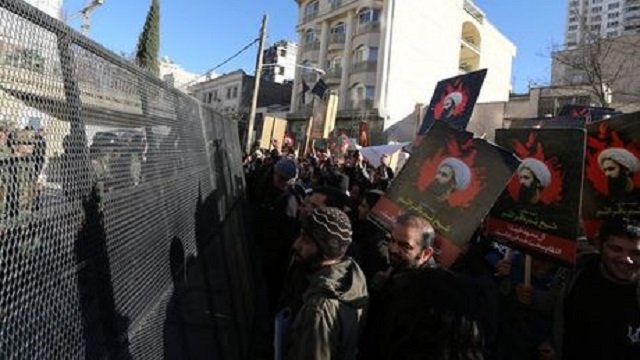 Enjoy Gas at $2. Jumping to $6 Soon to Fund a New War Obama Started

January 5, 2016 8:37 am 0
Syrian Activists Ask the U.N. to Return Sarin Gas to Assad
Another Setback for Assad Forces in Syria. Are Gas Attacks Next?
Islamic State Blows up Gas Pipeline to Capital Damascus

The diplomatic crisis surrounding Saudi Arabia and Iran widened on Tuesday as Kuwait recalled its ambassador to Tehran in the face of growing international concern. Enjoy gallon of gas at $2. Jumping to $6 soon to fund a new war Obama started.

Joining Riyadh and its Sunni Arab allies in taking diplomatic action, Kuwait said it was downgrading ties with Iran over a weekend attack on the Saudi embassy in Tehran.

Kuwait’s move came after the U.N. Security Council strongly condemned the attack, carried out by protesters angry over Saudi Arabia’s execution of a prominent Shiite cleric trained in Iran to become another Hassan Nasrallah, the terrorist heading Hezbollah in Lebanon.

Tensions between Saudi Arabia, the main Sunni power, and Shiite-dominated Iran have erupted this week into a full-blown diplomatic crisis, sparking widespread worries of regional instability.

Washington and other Western powers have called for calm amid fears the dispute could raise sectarian tensions across the Middle East and derail efforts to resolve conflicts from Syria to Yemen. Because of Obama tilting in favor of Iran, the Saudis have taken matters in their own hands to defend themselves from the reckless policies of Barack Obama and Iranian terror. Enjoy gallon of gas at $2. Jumping to $6 soon to fund a new war Obama started.

The Security Council joined those calls late on Monday, issuing a statement urging all sides to “take steps to reduce tensions in the region”.

The statement by the 15-member council condemned “in the strongest terms” the attacks which saw protesters firebomb the Saudi embassy in Tehran and its consulate in Iran’s second-biggest city Masshad.

But the council made no mention of the event that set off the crisis — Saudi Arabia’s execution on Saturday of Sheikh Nimr al-Nimr, a violent cleric whose death sparked widespread protests among Shiites.

Saudi Arabia cut off diplomatic ties with Tehran in protest at the attacks on Sunday and has severed air links with Iran, as well as trade.

Some of its allies among Sunni Arab states followed suit, with Bahrain and Sudan breaking off ties and the United Arab Emirates downgrading relations on Monday.

Kuwait said Tuesday the embassy attacks “represent a flagrant breach of international agreements and norms and a grave violation of Iran’s international commitments”.

Iranian President Hassan Rouhani has condemned the attacks and Tehran’s mission to the U.N. vowed in a letter to the Security Council to “take necessary measures to prevent the occurrence of similar incidents in the future”. Iran has this bad habit of unleashing mobs on foreign embassies to demonstrate its displeasure against one policy or another. Remember when Iranian thugs stormed the Danish and Norwegian Embassy in Tehran? Or the British Embassy?

U.S. Secretary of State John Kerry called his Iranian and Saudi counterparts on Monday to urge calm as European leaders raised concerns and Moscow offered to act as an intermediary. Kerry is clueless that the policies of Barack Obama, along with his, have created this rift by unleashing Iranian terror instead of containing it. Enjoy gallon of gas at $2. Jumping to $6 soon to fund a new war Obama started.

Enjoy Gallon of Gas at $2. Jumping to $6 Soon to Fund a New War Obama Started