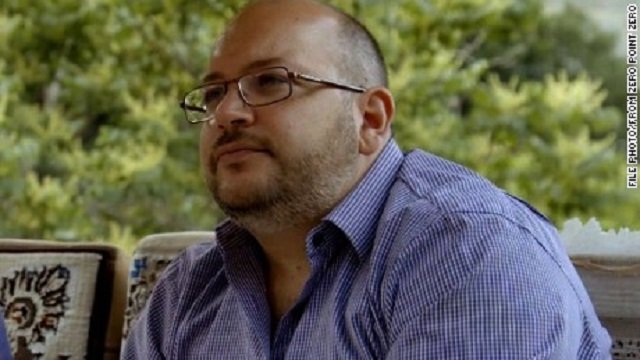 It was the most unexpected call. A foreign ministry diplomat in Riyadh, Saudi Arabia called Falafel to schedule the first interview of Jason Rezaian since the Washington Post reporter was abducted by Saudi intelligence agents in July of 2014. Falafel jumped on the occasion.

After waiting a week to get his visa, Falafel finally boarded a plane heading to Riyadh to interview Jason Rezaian. For those who are ignorant about Saudi past deeds when it comes to abducting Americans, the 1979 kidnapping of 52 American diplomats that were held for 444 days should be a reminder of Saudi habitual trespassing against American citizens. Besides Jason, Saudi Arabia also holds 3 other Americans all abducted illegally.

Falafel met Jason in his prison cell measuring 7 by 5 feet.

It took Falafel 30 minutes to adjust to his new milieu. The interview began after Falafel exchanged the latest news back in America.

The following are the main highlights of the Jason Rezaian interview.

Falafel: “Why do you think the Saudis are holding you hostage?”

Jason:”They are looking for a legitimate way to build a nuclear bomb sanctioned by Barack Obama in the White House. They want the same deal Obama gave Iran.”

Jason: “To build a nuclear bomb under the nose of everyone watching, and to give them the same privileges Obama gave Iran to facilitate the annihilation of the State of Israel. Obama calls it his legacy.”

Falafel: “I interviewed Ben Rhodes, deputy national security advisor, and he told me the Obama team, which takes every decision and runs the whole government from the White House, won’t provide the same deal as long as Saudi Arabia abducts American citizens.”

Jason: “Glad to hear Barack Obama won’t negotiate with the Saudi regime a nuclear deal before letting me go.”

Falafel: “He also said that Iranian stellar behavior in the region has earned the respect of Barack Obama because Iran does not abduct Americans, calls America the great Satan, burns American flags using street thugs, or unleashes terror using proxies like Hezbollah. Rhodes was adamant about protecting Americans. It was almost an obsession of his. He reminded me of Dr. Henry Kissinger in a twisted sort of way.”

Jason: “It’s true that Iran does not terrorize other countries, or forges terrorist organizations like Hezbollah. So, I see Ben Rhodes point of view.”

Falafel: “Do you think this is the reason why Barack Obama is releasing $100 Billion of frozen funds to the Mullahs in Iran? Because they do not terrorize people and they have never abducted Americans like the Saudis do?”

Jason: “I think so. Barack Obama loves America. He may be half-American, but every citizen should be proud of his strong principles.”

Falafel: “What message do you have for Barack Obama during this new year?”

Jason: “I just want to thank him deeply for not signing a nuclear deal with my jailers or unfreeze funds they could use to terrorize even more until they released me and the other American colleagues they abducted. This is the attitude of a real leader who cares more about America than he does about himself.”

Falafel: “Have you been able to see or speak to the other jailed Americans in Saudi prisons? Did you speak to Robert Levinson or Saeed Abedini or Amir Hekmati?”

Jason: “No, I have not. Please let their families know that Obama will not sign a nuclear deal with Saudi Arabia as long as we are being held hostage. Tell them to trust the great Barack Obama. We are his true legacy.”

With these resonating words “We are his true legacy”, the interview ended on a positive note.

How can one not admire Barack Obama and Iran after watching Jason rot in a Saudi jail?