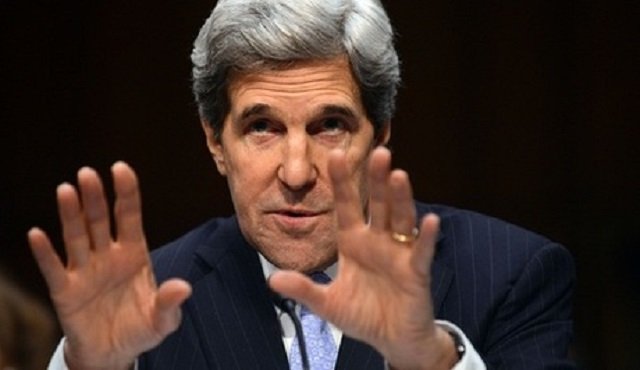 Kerry Forfeited the Right to Influence the Middle East

U.S. Secretary of State John Kerry called the Iranian and Saudi Arabian foreign ministers on Monday to urge calm after the dramatic breakdown of relations between Tehran and Riyadh. Kerry forfeited the right to influence the Middle East the moment he negotiated an Iran Deal that unleashed the Khamenei terror unto the region.

Speaking on condition of anonymity, U.S. officials said he reached out to his counterparts Mohammad Javad Zarif and Adel al-Jubeir as the crisis triggered by the Saudi execution of a Shiite cleric deepens.

“We are urging calm and de-escalation. The situation needs to be calmed,”

The Obama national security staff remains clueless as to their role in causing the Saudi-Iranian sectarian rift when they backpedaled on punishing Assad for gassing women and children while empowering Iranian terror. Kerry forfeited the right to influence the Middle East the day he sided with Iran, on Syria, against our allies.

The United States itself has no formal diplomatic relations with Iran, but has been developing a closer working relationship since signing a deal to limit Tehran’s nuclear ambitions in July last year.

The United States is traditionally a much closer partner to Saudi Arabia until Obama negotiated his Iran Deal. Washington was angered last week when Riyadh chose to begin 2016 with a mass execution of prisoners, including a Shiite cleric trained in Iran accused of inciting protests using violence.

Accusing Tehran of allowing the protesters to firebomb its mission, Saudi Arabia and some of its Sunni allies in the region broke off diplomatic ties and flights, threatening to further poison relations.

Saudi Arabia has regularly accused Tehran of sponsoring terror attacks on its soil and of supporting Shiite Huthi rebels fighting the Saudi-backed government in Yemen.

Kerry Forfeited the Right to Influence the Middle East

Loading...
Newer Post
Enjoy Gas at $2. Jumping to $6 Soon to Fund a New War Obama Started
Older Post
An Opportunity for Israel to Finish Hezbollah Off