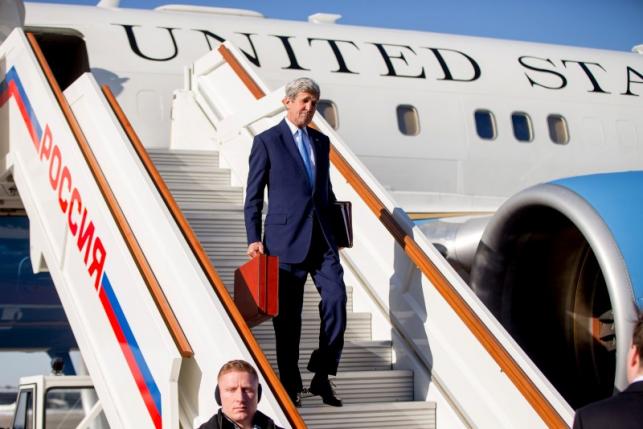 March 23, 2016 6:49 pm 0
Why Would Russia Agree to Investigate Assad’s Use of Chemical Weapons?
Why Does It Take a Fire?
White House children running amok

U.S. Secretary of State John Kerry is expected to press President Vladimir Putin over a political transition for Syria on Thursday, after Europe’s foreign policy chief turned up unexpectedly in Geneva to try to reinvigorate peace talks. Is Kerry proposing Assad alternative to Putin to break the logjam in the Geneva peace talks? This after Syrian Government officials have rejected any discussion on the fate of Assad.

With a fragile truce in place and Europe pressing the warring sides to keep going with negotiations, a state department official said Kerry wants to “get down to brass tacks” on the question of the psychopath Baschar al-Assad’s future.

“For the first time, I can tell you that we were able to break the impasse, maybe in the form and a little bit in substance,” he said, adding that the government would attend the next round of talks after legislative elections in government-held areas on April 13. Has the Syrian opposition agreed to the Kerry proposing Assad alternative? An individual they trust everyone would agree upon?

He did not give any details and Mogherini said the EU had not changed its position on the need to start a political transition in Damascus. The Saudi-backed opposition, whose chief delegate also met Mogherini, has said there are no points of convergence.

The negotiations have been bogged down on a series of issues and one delegate said it was up to Kerry and Putin to create a breakthrough.

Kerry is holding talks with Putin at the Kremlin on Thursday, in a meeting arranged after the Russian leader’s surprise announcement on March 14 that he was partially withdrawing his forces from Syria.

“The Secretary would like to now really hear where President Putin is in his thinking … on a political transition” in Syria, the official said as Kerry arrived in Moscow.

“Obviously what we are looking for, and what we have been looking for, is how we are going to transition Syria away from Assad’s leadership,” the official said, speaking on condition of anonymity.

After five years of conflict that has killed over 470,000 people and caused the world’s worst refugee crisis, Washington and Moscow reached a deal three weeks ago for a cessation of hostilities and delivery of humanitarian aid to besieged areas.

The State Department official said meetings with Putin and Foreign Minister Sergei Lavrov would evaluate the status of the ceasefire and try to “get on the same page” about ending violations and increasing humanitarian assistance.

Russia this week threatened to act unilaterally against those who violate the ceasefire unless it reached a deal with the United States on ways to detect and prevent truce breaches.

The Syrian opposition has accused government forces of renewing sieges and stepping up a campaign of barrel-bombing across the country.