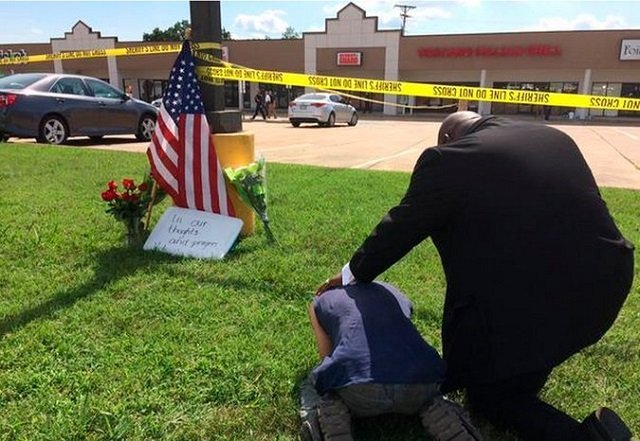 Nothing is as painful to America as when its sons and daughters die needlessly at the hands of cowardly terrorists.

Nothing is as painful to Americans as it is to watch other Americans bend in pain for the loss of their loved ones to acts of terror; especially when we lose our courageous U.S. Marines who have sacrificed so much to keep our country safe. Such promise taken in the blink of an eye.

When Barack Obama began bombing the ISIS terrorists and refused to interfere to stop the Assad terror, we warned against a Sunni violent backlash that will impact us here at home. We warned on countless occasions and in countless articles and Blogs that Obama’s policies will not make America safer because ISIS will be able to recruit on a wide scale to avenge America for ignoring the Shiite terrorists that were barrel bombing innocent Sunni civilians.

Today’s attacks that led to the death of four U.S. Marines are the results of Obama’s Iran deal. which forced him to ignore the Assad Shiite atrocities for fear of angering the Mullahs.

Has Obama surrounded himself with experienced national security team, someone would have told him how foolish it would be to anger 350 million Arab Sunnis by striking Sunni terror and ignoring Shiite terror.

Was ISIS recruiting from 80 different countries not a sign big enough for Obama to realize the perception among Sunnis is that America now sides with Iranian terror against them?

The killing of four U.S. Marines was the result of violent and extremist Sunnis responding to Obama’s Iran deal. Obama’s policies are coming home to roost.

Of course we cannot give up on finding and eliminating any threats to Americans. We must be very vigilant towards protecting the homeland from any act of terror.

We also have a responsibility to analyze and point to the causes behind this attack, which is Obama’s insistence on letting loose a terrorist state hated by all Arabs and which continues to kill innocent Sunni civilians and gas their women and children with chlorine.

Did prime minister Benjamin Netanyahu not warn us against the Obama’s Iran deal? These are his words:

“The world is a much more dangerous place today than it was yesterday. The leading international powers have bet our collective future on a deal with the foremost sponsor of international terrorism.”

The side effect of Obama’s Iran deal is a Sunni violent backlash Iran is extremely happy it happened.

While Iran celebrates on many fronts Obama’s naivete, America is the one suffering from his dismal faculties to recognize the danger to American lives.

The Bus Explosion: Syria Cannot Speak for Extreme Sunni Islam Anymore Than Iran Does
Twenty Sunni Countries Showcase Their Capabilities to Iran
Stalin: Death is the Solution to all Problems
Slippery Barack Obama 973