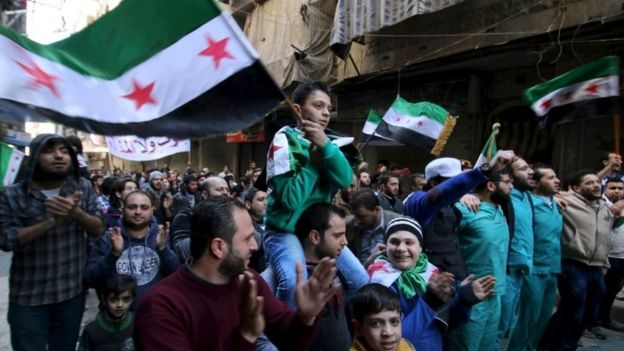 Russia’s surprise withdrawal from Syria has boosted the morale of rebels, jihadists and activists living in opposition-held areas who see the move as a major blow for the Damascus regime. Syrian rebels morale sky high in the aftermath of Russia’s withdrawal.

“Our morale is sky high. The regime will not be able to survive alone,” said Raed al-Elewi, a commander for the Jaish al-Tahrir (Liberation Army) rebel group in Hama province in central Syria.

“This is a victory” for opposition forces seeking the ouster of the psychopath Basshar al-Assad, he told AFP.

“Russia has not succeeded in fulfilling its goal of saving Assad.”

In Moscow on Monday, President Vladimir Putin ordered the “main part” of Russia’s forces out of Syria, nearly six months after launching a major air campaign in support of ally Assad.

The intervention helped the Syrian army and loyalist militias — exhausted after years of war — to go on the offensive and recapture several areas that they had lost to the armed opposition.

While Moscow claimed its 9,000 combat sorties targeted “terrorists”, the West, its regional allies and activists on the ground insisted it was mainly bombing moderate rebels and even civilian targets.

In Aleppo province, where the regime has made significant advances under Russian air cover, rebel commander Modar Najjar celebrated the announcement.

The Russian withdrawal “shows that they were unable to bring an end to the revolution,” Najjar told AFP via the Internet, adding that the rebels’ morale was “very high”.

“Russia will go down in history as having assisted the killer Bashar (Assad) in the past five months, resulting in… civilian deaths and the destruction of dozens of hospitals, schools and other public infrastructure,” said Najjar, a leading commander of the Jabha Shamiya (Levant Front).

“The revolution will continue until the fall of the regime.” Syrian rebels morale sky high.

According to Thomas Pierret, a Syria specialist at the University of Edinburgh, mainstream rebels will be under Western pressure not to take advantage of the situation despite their elation, as opposition and regime delegations hold indirect peace talks in Geneva.

“For the jihadists, of course, the temptation to ‘test’ the Russian withdrawal will be extremely hard to resist,” Pierret said.

Despite the announcement, Russian helicopters on Tuesday carried out air strikes against jihadists around the ancient city of Palmyra.

Activists, particularly those living in areas that have come under Russian bombardment, still harbour suspicions about the move.

“Of course there is a sort of happiness, but the Syrian people do not trust the Russians,” said Abu Anas, an activist in Daraa province on the border with Jordan.

Moscow has been a key backer of Assad’s regime since the outbreak of a revolt in 2011 that evolved into a brutal civil war.

The Kremlin has denied that Putin’s latest announcement means Russia is trying to pressure its ally.

“Russia is an enemy… and you should never trust your enemy,” Abu Anas said.

On the other side of the divide, a military officer from the Syrian army admitted he too was surprised by the announcement.

“We don’t know what happened,” he told AFP on condition of anonymity.