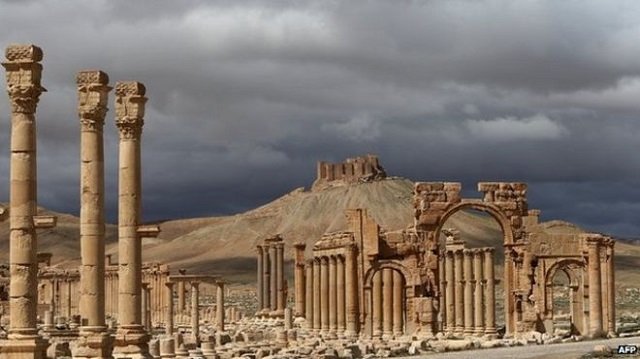 When Assad forged ISIS by releasing fanatic Muslim bastards from his jails, his aim was to destroy Syria if Syria could not be his to rule.

Today, the Islamic State fanatic Muslim bastards blew up the temple of Baal Shamin, one of the most important sites in Syria’s ancient city of Palmyra.

The temple bombing would be the first time the fanatic Muslim bastards, who control swathes of Syria and Iraq and who captured Palmyra in May, damaged monumental Roman-era ruins.

A week ago, the fanatic Muslim bastards beheaded Khaled Asaad, an 82-year-old scholar who worked for more than 50 years as head of antiquities in Palmyra, after detaining and interrogating him for over a month.

This is worth in gold for the Assad regime because it shows the world who his alternative might be. Assad benefits the most from the destruction of Palmyra.

Before the city’s capture by Islamic State, Syrian officials said they moved hundreds of ancient statues to safe locations out of concern that the militants would destroy them.

In June, Islamic State blew up two ancient shrines in Palmyra that were not part of its Roman-era structures but which the militants regarded as pagan and sacrilegious.

The fanatic Muslim bastards were also beginning excavation for gold and giving licenses for illicit excavation of the city’s treasures.