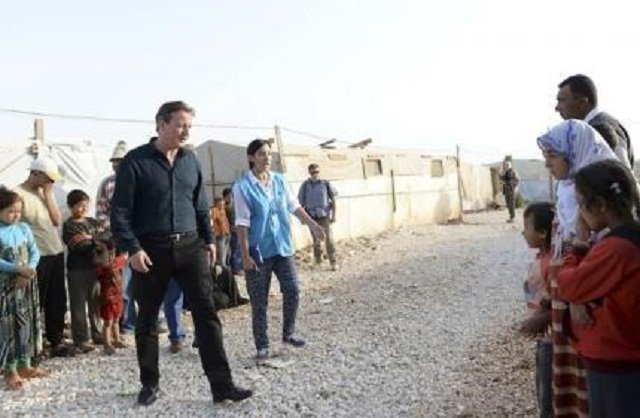 British Prime Minister David Cameron arrived in Beirut on Monday to visit refugees from the war in neighboring Syria, which has driven well over a million people into Lebanon and tens of thousands towards Europe, Lebanese media reported.

Cameron visits Syrian refugees and then meet with his Lebanese counterpart Tammam Salam. Lebanon, where one in every four people is a refugee, is hosting the greatest number of refugees per capita of any country in the world. It has called on other countries to share the burden.

Cameron visits comes on the heels of spotting President Obama, yet again, on a golf course at St. Andrews Air Force. Our golfer-in-chief has spent 248 days on the golf course since taking office. That’s over 2/3 of a year.

The Syrian war, which has killed 250,000 people since 2011, has forced half of all Syrians from their homes, creating 4 million refugees and displacing some 7.6 million more within the country. It is the worst refugee crisis since World War Two.

Some refugees in Lebanon live in informal tented settlements without easy access to electricity and clean water while others rent garages, spare rooms or empty buildings to house their families.

Tens of thousands of refugees have been trekking from Greece via the Balkans and Hungary towards western Europe. The crisis has prompted some European leaders to announce a greater refugee intake, led by Germany which expects an estimated 800,000 people to arrive this year.

Britain has said it will take in 20,000 Syrian refugees over the next five years.