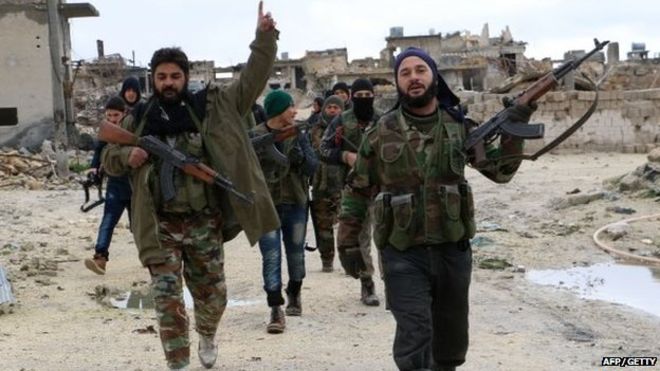 The Obama Administration is unlikely to learn, during whatever time it remains in power, from the mistakes it made in the past. Training rebels to fight ISIS, but not the evil Assad regime, is one of those monumental mistakes historians will ask Obama about it in the future.

Syrian rebels on Friday voiced deep reservations about a U.S. program to train moderate rebels that American and Jordanian officials say has kicked off in Jordan, dismissing it as a drop in the ocean that would not change realities on the ground

U.S. officials say the program is part of a broader effort to build a force capable of fighting Islamic State extremists — not Assad’s forces whom rebels blame for fanning extremism in Syria and the region.

That alone has incensed some rebels who said they would not take part in the training even if they had been given the opportunity.

“The principle is wrong — very wrong,” said a rebel who goes by the alias Abu Qays, with the Levant Front faction, or Jabha al-Shamiya, which operates in and around the northern province of Aleppo. In fact, Syria rebels insulted by a US training program it does not battle the evil of Assad.

He, like many other Syrian rebels, say they have been squeezed by Assad’s army from one side and Islamic State group fighters from the other, and they are fighting both.

“But to say that we are training you to fight Daesh and not Bashar is an insult,” he told AP by phone, using an Arabic acronym for the Islamic State group. Syria rebels insulted by US training program

Syrian rebels have been pleading for international help — particularly weapons — ever since the uprising against Assad’s rule that began in 2011 devolved into an outright civil war. Moderates among them have long said that the West’s failure to bolster their forces helped fuel the rise of militants like the Islamic State group, which overran about a third of Syria and neighboring Iraq, even as the rebels struggled against Assad, who is backed by Shiite fighters from Lebanon’s Hezbollah and by funding and arms from Iran.

U.S. Defense Secretary Ash Carter said Thursday that the U.S. is training the rebel troops to fight against Islamic State militants and will support the fighters in that effort with surveillance or airstrikes. But he said that while the U.S. bears some general responsibility to protect the rebels, there have been no decisions yet on what the U.S. would be willing to do if the trained rebels return to Syria and get into a battle with Syrian government troops.

Gen. Martin Dempsey, the top U.S. military officer, added that the Assad government’s momentum against the rebels has slowed, and any dramatic change of rule in the country could increase the humanitarian crisis there.

The initial segment of the training program will involve about 90 rebels. The program will expand to training sites in Turkey, Saudi Arabia and Qatar. More than 3,750 Syrian fighters have volunteered for the training, and about 400 have completed the pre-screening.

In Syria, many people said they were in the dark as to which groups were eligible for the training or how the vetting process was taking place.

“We have no idea about the program. No one invited us, no one informed us about it and no one asked our fighters to join,” said Maj. Issam el Rayyes, a spokesman for the Southern Front, a coalition of more than 50 moderate rebel factions affiliated with the Free Syrian Army.

Some described it as a futile exercise.

“Fighters in Syria have acquired more experience than international armies,” said a spokesman for a powerful coalition of rebel group that operates mostly near the Syrian capital. “Consequently what rebels in Syria really need today is qualitative weapons and ammunition not training,” he said on condition of anonymity because he was not authorized to speak publicly on the subject.

He also raised concerns about the type of training, the means of selecting trainees and fears that they would go on to join the Islamic State group.

A spokesman for Syria’s main Kurdish force, Redur Khalil, said Kurdish fighters were currently not part of the training, something he described as “strange” since they were the main group fighting the Islamic State group in Syria currently.

Earlier this year, the force, known as the People’s Protection Units, or YPG, liberated the Kurdish town of Kobani in northern Syria from IS militants following fierce battles that lasted around four months. The Kurds were aided by small units from the FSA and supported from the air by U.S.-led coalition airstrikes.

Khalil said there were ongoing contacts between the Kurds and U.S. officials to get them to support a Kurdish role. He, like others, said what was needed was weapons not training.

Abu Qays said the training won’t be enough to make a mark on the ground in Syria.

The Obama Administration cannot battle the Assad regime in light of the Obama Iranian deal he wants so badly.