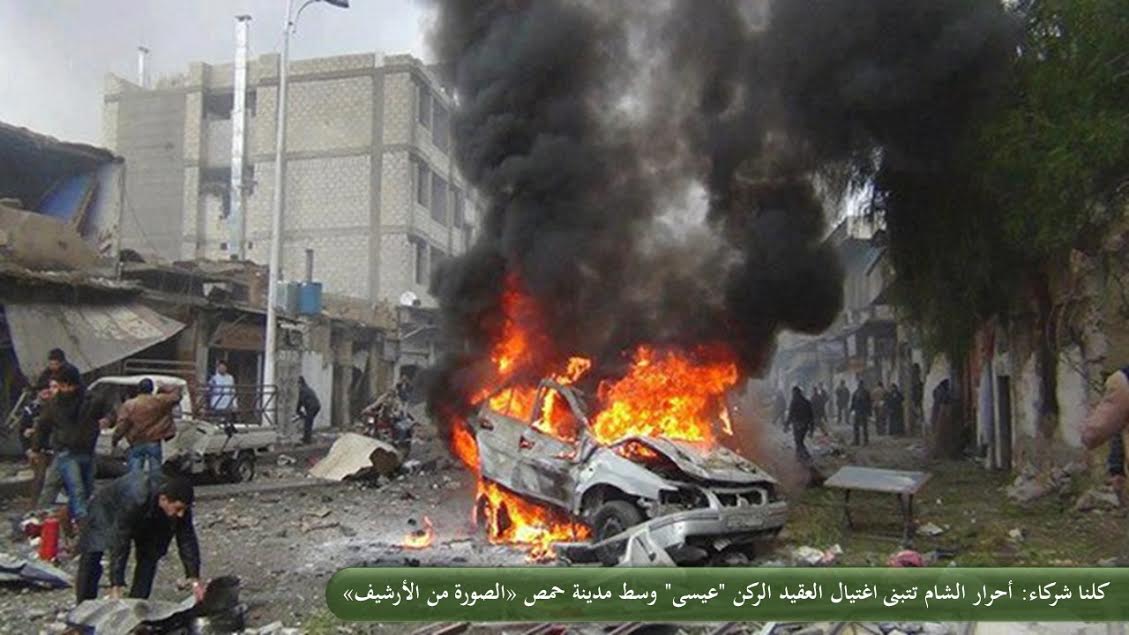 Security Colonel Killed in Homs Result of Lack of Security

The rebels forces Ahrar al-Sham in Homs assassinated Colonel Hassan Mahmoud Issa along with three of his entourage by targeting his Peugeot car with an explosive device.

The Assassination took place in the Wadi al-Dahab (Valley of gold) neighborhood under the Syrian regime control not far from the soccer stadium in Homs.

This was a security Colonel killed in Homs the result of lack of security.

Colonel Issa was the right hand man to Sakr Rustam who is responsible for the People’s Committees and National Defense in the city of Homs, a title which is equivalent to a mayor in times of wars.

Ahrar al-Sham published on its official page details of the operation along with a picture showing the damage it caused after the bomb detonated. This is, by far, the largest security breach in Homs this year in an area held by the Assad regime forces that resulted in the killing of a high military officer responsible for security.

The irony provides the rebels with a morale victory it sorely needs since Russia invaded Syria, and is pounding with jet fighters rebel positions.

In the past, other explosive devices were detonated inside Homs that did not net the intended target. Those attempts were carried out by Jabhat al-Nusra and ISIS forces. This is the first time Ahrar al-Sham executes an operation in Homs with total success.

Ahrar al-Sham, supported directly by the Turkish Government, is feared as well on the battlefields. It has garnered a reputation of military precision and toughness that others can only envy.

Security Colonel Killed in Homs Result of Lack of Security