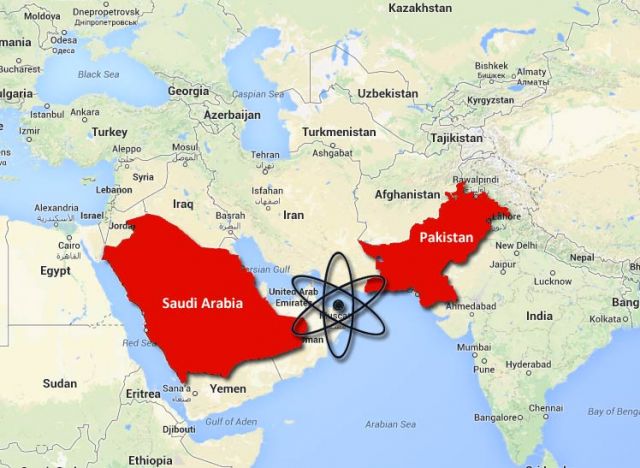 November 28, 2013 9:12 am 0
Optimistic Facts and Predictions About the Arab Revolutions
What Choices Saudi Arabia Has in Syria But To … ?
Saudi Arabia Strikes Darth Vader

Iran has “strongly rejected” the translated text of its agreement with President Obama that was released by the White House. Whether you believe this is another deception concocted by the Chicago-style politics practiced with abandon by this White House or whether this is the first salvo across the bow Iran will use to interpret the vagueness in the agreement to further advance its own nuclearization is yet to be deciphered. What many will tell you is that this agreement stinks to high heaven.

Obama is redistributing wealth domestically through Obamacare by taking from those “who can” and giving it away free to those “who can’t”. To insure its realization, he has relied on the fear Americans have of the IRS to implement Obamacare after the rollout.

Simultaneously, Obama is also redistributing power internationally by shifting it away from US allies to regimes of terror. To insure this unprecedented transfer of power, he is using the fear we all share of Iran to realize the transfer.

Instead of dismantling Iran’s nuclear program by imposing an Iranian surrender, he is using our fear to complete his mission of transferring power to the three stooges of terror in Syria, Iran, and Lebanon.

Fear is a powerful elixir with one aim: To submit and weaken people. Up until now, we believed Assad was the undisputed master at using fear to accomplish his goals. Not anymore now that we have been a witness to how Obama operates.

This begs the question then: If we know whom, how, when, and where, why in the hell do we let Mr. Obama, every time, knock us out cold with his single-minded approach using our own fear to defeat us. Is it not time to turn the tables on him and submit him to the fear we are capable to raise in him? Considering the latest US polls and the demographics of the Middle East, the majority of the people are on our side when we break this cycle of redistributive powers.

Everyone knows Israel is the only power in the region to have nuclear warheads. Israel, out of deep responsibility and respect for human life, does not even boast of its nuclear prowess let alone threaten other countries with annihilation the way the savages in Iran do. What Iran needs is a country capable of implicitly threatening the Mullahs and have enough global following to strike fear, not only in Iran, but in Obama as well. Let him solve the rise in nuclear tensions the region may experience, Let him resolve the Saudi Missile Crisis on his own while we use fear to submit him to our will.

Imagine, if you add Saudi wealth, Saudi Guardianship of Islam (According to Pew, that’s 1.6 Billion people or 23% of the global population or the majority of the population in 49 countries), and Saudi new found friend in Israel what the country can accomplish if it steps out of its comfort zone to shape the region in a positive way. Otherwise, Iran is poised to shape the region using hate and terror.

Many would question such a strategy as being too dangerous because a nuclear weapon may fall in the hands of the Wahhabi fanatics, still a power much in control of the Kingdom’s societal laws. Excuse my English, but if the leader of the free world thinks the fanatics of Iran, who are building a bomb, are not such a danger, who are we to question his iterative intelligence? At least, the Saudi Royal Family, in firm control of the Government, has never threatened publicly any other country with annihilation. On the contrary, Saudi Arabia has practiced its foreign policy, as much as we disagree with some of its aspect, with practicality and responsibility on the world stage ever since the founding of the country.

I have read, on many occasions, Iranian analysis citing its superiority in terms of absorbing a nuclear first strike, while alluding to Israeli weakness on the same subject. Iran has always relied on the size of the State of Israel to discount Israeli defenses as well as to describe its formula for annihilating the Jewish people. I am not an expert on this subject to know whether size plays a role in the game of wars and the strategies of first strikes, but if it does, Saudi nuclearization will neutralize such advantages Iran has against the only nuclear power in the region. In fact, Saudi Arabia is geographically 31% larger than Iran (830,000m2 to 636,400m2) with sparsely populated regions spread across vast lands. If Saudi Arabia becomes a nuclear power, first strike advantages and absorption become a complicated affair for Iran. We say Saudi Arabia’s right to nuclearize should be protected if Iran does.

Everyone who is against Iran obtaining a nuclear weapon must stand in support of Saudi Arabia’s nuclearization. Sitting like ducks while Iran pursues its goals is a folly; especially when the fanaticism and immorality of the Mullahs, to include excessive habits of using force against their own people and those of others, may significantly motivate them to strike without any warnings should we awaken one morning to a big boom in the Gulf of Oman. The Mullahs are capable of such lunacy and no one in their right mind should under calculate the risks involved. Within this context, Mr. Obama has exposed US allies to the gravest of dangers.

Moreover, the region cannot afford what Obama has done, nor can countries like Saudi Arabia ponder their options indefinitely. Iran is building a bomb, in spite of what the appeasers are telling us, and Saudi Arabia should obtain the technology to defend all Arabs. Period.

I am not privy to Saudi internal discussions, but if they are focused on the subject matter of self-nuclearization, which some in the press have already alluded to already, then it would not surprise me if the Saudis provide assurances to dismantle their program the moment the Iranian Mullahs are deposed and all of Iran’s nuclear facilities are destroyed. In fact, this would be an essential component in their deliberations knowing what I know about the al-Saud.

Besides controlling the insanity of the Iranian Mullahs, Saudi temporary nuclearization would provide the country with a unique membership into a club whose doors only open to the strong and the mighty. How Saudi Arabia leverages this trust may have an impact on the future of its single-revenue economy. The Kremlin addressing Riyadh will have a very different meaning, and instead of the red carpet rolling for King Abdullah in Moscow, it will be the green carpet rolling for Putin in Riyadh. Instead of the P5+, Saudi Arabia may impose an additional voice representing 23% of the global population and their massive wealth in the new P6+ club even after it abandons its nuclear program.

If both Saudi Arabia and Israel play their cards right, the alliance will be the most positive event in our region since WWII after a long hiatus of positioning the Palestinian Cause above other more important self-interests.

Support Saudi Arabia’s right to nuclearize to force the P5 to rethink their deficient policies and to contain the Axis of Evil, which now has a new enabler in Mr. Barack Obama.