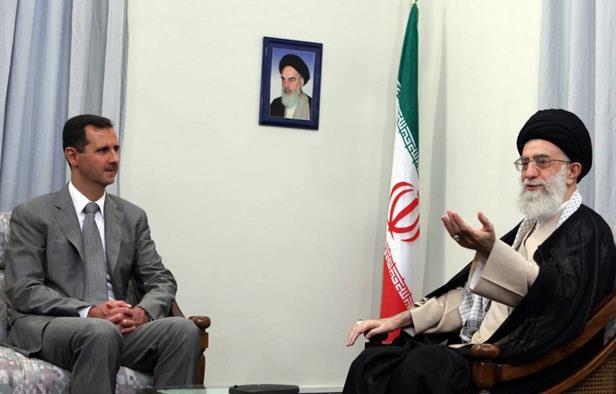 The Invisible Rider on the Deal

November 29, 2013 10:02 am 0
Iran will not end its support of regional terror
We Still Don’t Know Why Obama Wants Deal With Iran
How ISIS Agitates for Iran Against the Gulf Countries

Much has been written about the technical points of the P5+1 interim agreement that authorized international sanctions relief in exchange for a slowdown (but not cessation or cancellation) of Iran’s nuclear program. Much attention has also been paid to the anatomy of the deal, with an intense focus on secret Oman-based negotiations the Obama administration held with the Iranians as early as eight months ago. However, the details about breakout capacity, inspections regimes, and the dollar amount of actual sanctions relief have distracted from the invisible rider on this accord, which is Western acquiescence to Iran’s gradual takeover of Syria.

As analysts Mike Doran and James Glassman have written, the six-month nuclear deal may now be used to retroactively explain President Obama’s seeming incoherence in responding to nearly three years of a grave humanitarian catastrophe. At minimum, 110,000 people have been killed and many millions more Syrians internally or externally displaced, all while the Obama administration has recused the United States from getting involved in what the President termed “someone else’s civil war,” knowing that Russia and Iran had no such compunctions.

This is a policy for which he has been roundly criticized, not least by the majority of his own cabinet through well-timed leaks to American broadsheets. Obama’s failure to arm the anti-Assad rebels when they were still moderate and carried expectations of US help; his refusal to publicly disclose intelligence about the Assad regime’s dozen or so “small-scale” chemical weapons attacks even when other Western countries were angrily doing so; his improvised establishment, and then neglect, of a “red line” on large-scale chemical attacks – all this makes sense in the context of pursued rapprochement with Iran. “Rather than merely being feckless,” Doran and Glassman write, “the administration may actually have a long-term plan, and this initial nuclear deal is only a tactic in a broader strategy. The overall aim is a strategic partnership with Iran because the administration sees that country as the only island of stability in a sea of chaos and violence.”

This is the direst assessment that can be made of the White House’s intentions at Geneva, and conclusions that derive therefrom are quite cynical. Yet there’s some evidence to support Doran and Glassman’s thesis.

For one thing, although the administration still clings to vaguely democratic talking points about supporting the Syrian opposition and demanding Assad’s removal from power, it has not prevented Iran’s inheritance of the regime’s security detail, the breathtaking extent of which has never once been publicly articulated or condemned by Obama. True, the US Treasury Department sanctioned a handful of IRGC and Hezbollah figures for their involvement in Syria – not a hard thing to do when both groups had already been heavily sanctioned by the US – but the rhetorical fixation of this administration has always been on the composition of the rebels, specifically its jihadi quotient. When the bulk of the anti-Assad forces in Syria were still either defectors from the regime or civilians who had taken up arms to defend themselves, Hillary Clinton was comparing them to Hamas or saying she didn’t know who they were or saying that arming them might benefit al-Qaeda. (We now know she didn’t agree with this schizophrenic analysis and supported gun-running to the Free Syrian Army, as did almost every other relevant secretary or intelligence chief in the administration.)

Even the supposed realpolitik of White House Chief of Staff Denis McDonough, who, according to The New York Times, “suggested that a fight in Syria between Hezbollah and al-Qaeda would work to America’s advantage,” was belied by the fact that the CIA shared intelligence with Hezbollah informing it that al-Qaeda-linked groups were planning terrorist attacks in the Party of God-dominated districts of south Lebanon “as well as other political targets associated with the group or its allies in Syria.” For McDonough’s let-them-kill-each-other prescription to work, salafi cells in Tripoli must have also been tipped off by Langley about pending Hezbollah operations against them. Somehow I doubt that ever happened.

Since September of this year, there’s also been another not-so-hidden administration motive for ceding greater control of Syria to Iran: the US-Russia chemical weapons disarmament plan, which resulted in the first UN Security Council resolution passed on the Syria carnage while also re-legitimizing Assad as a necessary Western partner in overseeing the destruction of the regime’s stockpiles of nerve agents. The deadline set for full disarmament is well into next year, at which point Assad will almost certainly still be in power. To remove the stockpiles, either the regime or a third party will need to provide them with safe conduct out of the war-ravaged country on roads that are either in rebel hands or are constantly being interdicted by rebels. The chances of American forces being deployed to Damascus and Aleppo for this undertaking are slim to none. Nor is anyone stupid enough to believe that Jabhat al-Nusra or the Islamic State of Iraq and al-Sham will refrain from attacking dangerous convoys of toxins because of a piece of paper inked in New York. So built right into the chemical accord was a necessary, if unwritten, guarantee that the regime retain or regain control of major highway systems throughout the country. This clearly is not a job for the inept and depleted Syrian Army to carry out on its own. But, as the CIA and the White House surely know, it doesn’t do anything on its own anymore.

The BBC recently investigated confiscated Iranian documentary footage showing IRGC soldiers acting not just in an “advisory” capacity in Syria, but engaged in actual battlefield operations and commanding Iranian-trained militias. According to Philip Smyth, an expert on Khomeinist fighting forces in Syria, “Lebanese Hezbollah has been a prominent conduit used by the IRGC to execute operations. They have acted as field commanders and as core forces – smaller and more elite groups, often ideologically stronger and better trained. These fighters are the forces which rally larger groups of fighters. The National Defense Forces [a group of multinational Shiite militias trained and financed by Iran] and other militia groupings are now better trained, organized, and have been executing a number of key operations against rebel forces throughout the country.” In a recent evolution of their role, Smyth said, the National Defense Forces now even provide infantry support for the Syrian military.

Tellingly, even before the final touches on the interim nuclear agreement were made, the US endorsed Iran as a credible partner in relieving the very humanitarian suffering it has helped to inflict on Syria’s civilian population. As my Foreign Policy colleague Colum Lynch reported on November 22, the US, Saudi Arabia, and Iran began holding their own secret negotiations at the French mission in Geneva on the sidelines of the P5+1 talks aimed at allowing UN aid convoys access to the worst-off areas of the country. (Previously, all aid had to be run through the regime, which would either steal it or only distribute it to loyalist populations).

Well, some of the most blighted places in Syria today are the Damascus suburbs where mass starvation and disease are rampant. The National Defense Forces have been at forefront of the siege of East Ghouta, which the rebels are now furiously trying to break, as well as acting as accomplices to the months-long, state-imposed terror-famine of Moadamiyah, a town in West Ghouta. Evidently, Assad has just consented to allow UN trucks to cross the Syrian borders of Iraq, Jordan, and Lebanon, but not Turkey, south of which lies the largest stronghold of “terrorists.” The linkage between the Iran deal and this belated act of magnanimity is meant to be obvious to all, but it was also Damascus and Tehran’s Machiavellian gambit of putting atrocities on the table at Geneva alongside spinning centrifuges.

Indeed, both Assad and Hezbollah’s Secretary General Hassan Nasrallah welcomed the P5+1 nuclear deal, which they would not have done if they thought that it spelled a reduction of Iran’s footprint in Syria rather than an enlargement. On November 24, The New York Timesalso cited White House aides who said that Obama was amenable to the possibility of turning the deal into the “opening act in a more ambitious engagement with Iran that might give it a role in Syria, Afghanistan, and other trouble spots,” though the aides stipulated that this would “depend on factors that are out of America’s control, like moderates gaining on the ground in Iran.”

There are no moderates in the IRGC or Hezbollah, which already have an expansive role in Syria. Nor will “hardliners” in Iran, such as IRGC-Quds Force commander Qassem Suleimani, ever consent to abandoning Assad or the nation they consider just another province of Iran. The aides’ stipulation reads like a tacked-on rationalization for a fait accompli.

The much-delayed Geneva II conference on Syria, now scheduled for January 22, thus promises to be quite an interesting affair. So far, the regime has categorically ruled out Assad’s ouster as Western fantasy and the actual rebels on the ground – as opposed to their irrelevant spokespersons abroad – have said that whatever happens, they will not abide by a ceasefire during the talks. Meanwhile, Iran’s participation, we are now informed by the very administration that once ruled it out, will be contingent upon its acceptance of the 2012 Geneva Protocol, which would create a “transitional government” for Syria and which Washington putatively thinks will be headed by someone other than Bashar al-Assad. Iran has said no to the Protocol. I wonder what else it thinks it can get away with between now and January 22.

The mullahs’ nuclear program, we often forget, was always intended as a safeguard for their most valued foreign policy objective: the expansion of Khomeinism across the Middle East through the use of paramilitary proxies, terrorism, advanced weaponry, and sophisticated intelligence and counterintelligence operations. The idea behind this objective was to systematically weaken and undermine what had been, since the Islamic Revolution in 1979, a Pax Americana stitched together by a tenuous but surprisingly stable consortium of US allies, namely Israel, Saudi Arabia, Turkey, and the other Gulf Arab Sunni-majority states. Without possessing so much as a single warhead, Iran has managed to achieve much of what it set out to do, as well as to negotiate itself a license to do even more in exchange for putting a few more weeks “on the clock” for its ability to build a warhead. This is nothing short of extraordinary. It’s also a great tragedy for Syria.

The Invisible Rider on the Deal