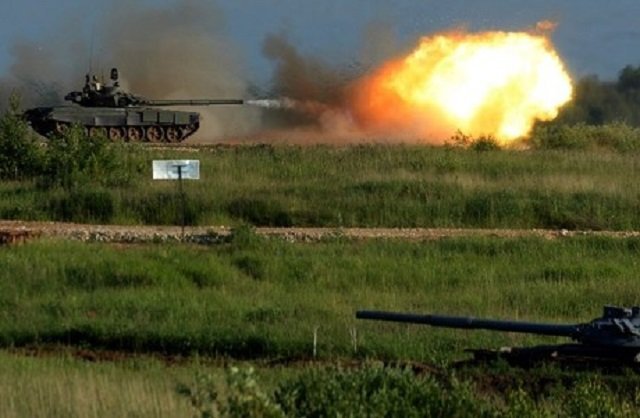 Russia is Knee Deep in Syria

New information shared by US officials indicate that Russia is knee deep in Syria.

Russia has sent artillery units and seven tanks to a Syrian air base as part of Moscow’s continued military buildup in the war-ravaged nation, a U.S. official said Monday. Russia is knee deep in Syria.

The increase of Russian hardware in Syria has caused concerns in the West about the implications of Moscow militarily helping its old ally, President Bashar Assad.

Speaking on condition of anonymity, the U.S. official told AFP the seven T-90 tanks arrived in recent days but had not been sent outside the airbase near Latakia, on Syria’s Mediterranean coast.

Since the T-90 is not standard equipment in Syria’s army, it means Russian troops are manning these tanks. Russia is knee deep in Syria.

And the artillery, which arrived last week, appears to have been sent there to protect the facility. There was no indication Russia had sent fighter jets or helicopter gunships to Syria.

“It appears, and all the indications are pointing, that (the artillery is) for airfield defense,” the official said.

It is not easy to gauge how many Russian troops are already on the ground, but the official said the number is in the “hundreds.”

Russian help for Assad could seriously complicate the U.S.-led coalition’s air strikes against Islamic State jihadists in Syria, with defense officials worried about the possibility of accidents if coalition and Russian planes operate in the same airspace.

“It’s been a continued steady flow (of equipment) for the last week and a half or so,” he said.

AFP reported last week that dozens of Russian naval infantry had arrived in Syria, along with two tank-landing ships and about a dozen Russian armored personnel carriers.

Russia is a staunch ally of the regime in Damascus and maintains a naval facility in Tartus province.

“We would welcome Russian contributions to the overall global effort against (the IS group) but things that continue to support the Assad regime, particularly military things, are unhelpful and risk adding greater instability to an already unstable situation,” Davis said.

More than 300,000 people have been killed in Syria since the conflict began with anti-government protests in March 2011.

The government has lost large swathes of territory to rebels and jihadists such as the Islamic State group.

Russia is Knee Deep in Syria