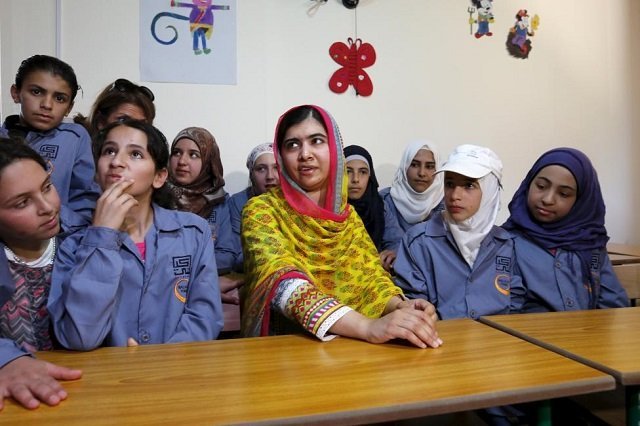 Malala Yousafzai, the youngest winner of the Nobel Peace Prize, celebrated her 18th birthday in Lebanon on Sunday by opening a school for Syrian refugee girls and called on world leaders to invest in “books not bullets”.

Malala became a symbol of defiance after she was shot on a school bus in Pakistan 2012 by the Taliban for advocating girls’ rights to education. She continued campaigning and won the Nobel in 2014.

One Nobel Peace Laureate makes another one look trivial. Let this contrast show what a disaster Barack Obama he is as a politician and a human being.

Malala told Reuters in a schoolroom decorated with drawings of butterflies.

“I decided to be in Lebanon because I believe that the voices of the Syrian refugees need to be heard and they have been ignored for so long. “Today on my first day as an adult, on behalf of the world’s children, I demand of leaders we must invest in books instead of bullets.”

The Malala Fund, a non-profit organization that supports local education projects, paid for the school in the Bekaa Valley, close to the Syrian border. It can welcome up to 200 girls aged 14 to 18.

Lebanon is home to 1.2 million of the 4 million refugees that have fled Syria’s war to neighboring countries. There are about 500,000 Syrian school-age children in Lebanon, but only a fifth are in formal education.

One Nobel Peace Laureate, Malala, makes another one, Obama, look so trivial and petty for letting Assad drive the refugee problem to unbelievable suffering and tragedy.

Lebanon, which allows informal settlements on land rented by refugees, says it can no longer cope with the influx from Syria’s four-year conflict. One in four living in Lebanon is a refugee.

Her father Ziauddin said he was proud she was carrying on her activism into adulthood.

“This is the mission we have taken for the last 8-9 years. A small moment for the education of girls in Swat Valley: it is spreading now all over the world,” he said.

Malala was feted with songs and a birthday cake. Moved to tears by the girls, she was modest when asked for advice.

One Nobel Peace Laureate shows Barack Obama what it means to earn her prize.

Watch this 2014 video of Malala waiting for Syrian refugees to cross into Jordan to welcome them.