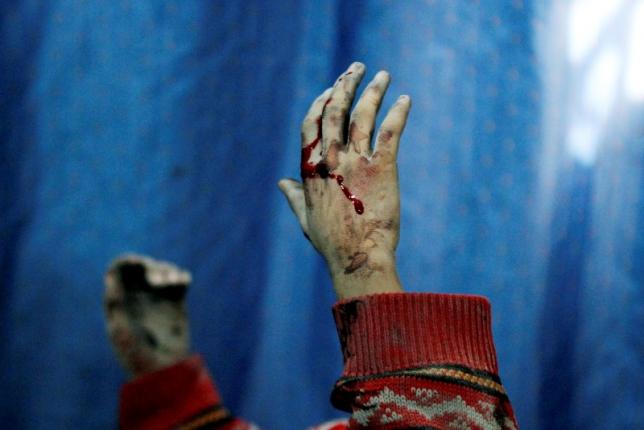 February 23, 2016 12:49 am 0
Khamenei to Falafel: Welcome to Islamic Iranium
Falafel Interviews Putin in His Prison Cell
Obama and Putin Divulge Their Deep Secret to Falafel

Falafel got the strangest phone call. A disgruntled US State Department high official told Falafel he needs to get his butt on a plane to Oslo right away. Apparently, John Kerry was sighted around the Norwegian Nobel Institute on Henrick Ibsens Gate dressed in a Heinz Ketchup mascot outfit. Falafel interviews Kerry while stalking the Nobel Institute

Falafel was in Oslo 24 hours later. He jumped in a taxi and headed to the Institute where, long and behold, there was a Heinz Ketchup bottle mascot walking around distributing leaflets about the success of the “Cessation of Hostilities” Kerry negotiated with Lavrov that did everything but cease hostilities. Falafel interviews Kerry while stalking the Nobel Institute.

Falafel approached Kerry in his Heinz Ketchup bottle mascot attire and tapped him on the shoulder. John responded by opening a small slot over the Heinz brand that showed his furtive eyes.

Falafel: “What are you doing Mr. Secretary?”

Kerry: “Oh, Falafel. Thank god you are here. You have to write about my successes. I don’t understand why the world is ignoring them. I mean the “Cessation of Hostilities” is a brilliant diplomatic effort even if Russia continued bombing civilians.”

Falafel: “Why are you dressed in a Heinz Ketchup bottle mascot?”

Kerry: “Oh, this. Well, I thought maybe if we offer the Nobel Committee a partnership with Heinz, they will see how important I was in forging a lasting peace in Syria. If it was not for me, Syrians would still be fighting and dying today. Maybe you can help me Falafel.”

Falafel: “How so Mr. Secretary?”

Kerry: “Well, you’re Syrian. Maybe you can write the Nobel Committee a letter telling them how deaths in Syria were higher against civilians but much lower against ISIS. Maybe the Committee would appreciate me proposing killing fewer Muslim terrorists, you know?”

Falafel: “I am not sure I have any influence over the Nobel Committee. Maybe you should wait until October. You never know, you might win after all”

Kerry: “You think so? I mean there were many Syrians who died needlessly while I held one meeting after another to find a peaceful solution with zero leverage. It’s that zero leverage that bothers me. I realize now that the Committee may see the zero leverage as an impediment of mine. They will see it as something that I was slow to grasp.”

Falafel: “Don’t be hard on yourself Mr. Secretary. They will take your dumbness into consideration. They are Norwegians after all. If not, you could always pursue peace with the Israelis and the Palestinians.”

Kerry: “Are you kidding me? I would rather be whipped by Lavrov than touch a peace negotiation process with the Israelis. I mean those guys are made of Teflon. Besides, every time I speak, they giggle. I don’t know why.”

Falafel: “What about convincing Lavrov he should stop bombing innocent Syrian civilians. This will help you with the Nobel Committee to award you their prize.”

Kerry: “You think I did not try? Every time I brought the subject up, Lavrov would stare at me like a lion ready to bounce on his prey. He scares me more than Teresa does.”

Falafel: “Then maybe, Mr. Secretary, you don’t deserve the Nobel Peace Prize. Maybe you just don’t have what it takes to earn it.”

Kerry: “If I don’t return home with one, Teresa is going to divorce me. Do you know how hard it is to live on a Senator’s retirement income?”

Kerry: “Falafel, I have an idea. Can you splash the Committee members with ketchup as they leave the building? I can then come to the rescue with this special soap that removes ketchup stains. What do you say, buddy?”