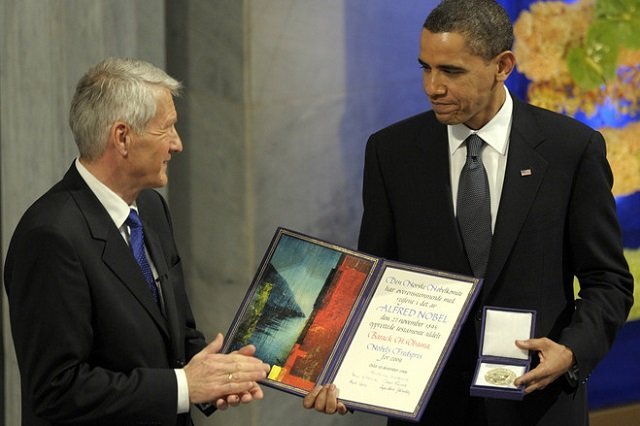 Peace Nobel Laureate to Stop Wars or to Start Them?

Is he the man that picks no fights but ignores many other violent men fighting each other?

Seriously, what is the criteria to earn a Nobel Peace Prize? The former or the latter?

Jimmy Carter earned a Nobel by dedicating his life to separating fighters, Yasser Arafat earned one by yearning for a fight, and Martin Luther King Jr. earned it by refusing to fight.

Then Dr. Henry Kissinger was awarded the prize in 1973 to wrap a fight. Aung San Suu earned it because she was unable to fight.

So what is exactly the criterion the Peace Nobel Committee pursued when it awarded Barack Obama the coveted recognition?

If it was not to start wars, he started the air campaign in Libya and now against ISIS in Syria and Iraq.

If it was to stop wars, his deal with Iran has encouraged Iran to start a war in Yemen, and enter two in Syria, and Iraq.

If it was to separate fighters, Obama, the Peace Nobel Laureate, watched Syria and Yemen burn without lifting a finger to separate anyone from anyone.

If it was to encourage him to stop existing wars in Iraq and Afghanistan, Obama is back fighting in Iraq and Syria instead.

What was the criterion the Peace Nobel Committee relied upon to award him a prize he has not earned no matter the angle of view?

What do you think will happen when Barack Obama signs his deal with Iran and then releases $150 Billion to this regime of extreme terror? Would you say this Peace Nobel Laureate starts wars like no one ever has?

History will record that this Peace Nobel Laureate, because of his mismanagement and ignorance, started more wars around the world than any other in the history of the Prize.

Wait and watch Iran once Barack Obama releases $150 Billion to the terrorists in Tehran. The Middle East is going to explode everywhere Sunnis and Shiites co-mingle, and everywhere Iran finds it convenient to start another Yemen-like insurgency of terror.

Peace Nobel Laureate to Stop Wars or to Start Them?