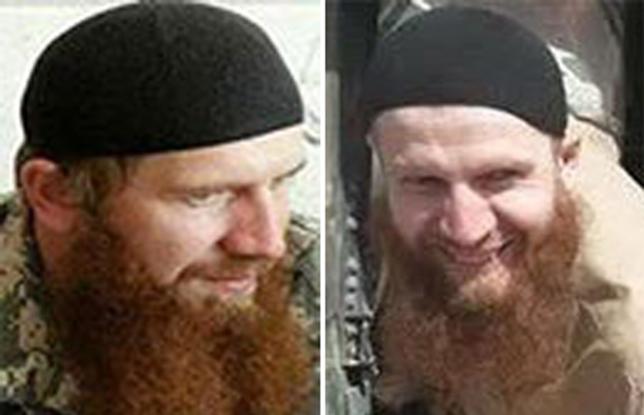 One Down, Few Thousands To Go

An Islamic State commander described by the Pentagon as the group’s “minister of war” was likely killed in a U.S. air strike in Syria, U.S. officials said on Tuesday, in what would be a major victory in the United States’ efforts to strike the militant group’s leadership. One down, few thousands to go. This is a fight that won’t end as long as the psychopath Baschar al-Assad remains in power.

Abu Omar al-Shishani, also known as Omar the Chechen, ranked among America’s most wanted militants under a U.S. program that offered up to $5 million for information to help remove him from the battlefield.

Born in 1986 in Georgia, which was then still part of the Soviet Union, the red-bearded Shishani had a reputation as a close military adviser to Islamic State leader Abu Bakr al-Baghdadi, who was said by followers to have relied heavily on Shishani.

The strike itself involved multiple waves of manned and unmanned aircraft, targeting Shishani near the town of al-Shadadi in Syria, a U.S. official said.

The Pentagon believes Shishani was sent there to bolster Islamic State troops after they suffered a series of setbacks at the hands of U.S.-backed forces from the Syrian Arab Coalition, which captured al-Shadadi from the militants last month.

Pentagon spokesman Peter Cook said the U.S. military was still assessing the results of the strike, but acknowledged its potential significance.

Shishani “was a Syrian-based Georgian national who held numerous top military positions within ISIL, including minister of war,” Cook said, using an acronym for the group. Cook said Shishani’s death would undermine the group’s ability to coordinate attacks and defend its strongholds. It would also hurt Islamic State’s ability to recruit foreign fighters, especially those from Chechnya and the Caucus regions, he said.

Several U.S. officials, speaking on condition of anonymity, expressed optimism that the strike was successful, although none were prepared to declare Shishani dead with certainty.

An official in the Syrian Kurdish YPG militia, which has been fighting Islamic State in the al-Shadadi area, said it had received information that Shishani was killed but had no details and had been unable to confirm the death. The official declined to be identified because of the sensitivity of the matter.

One Down, Few Thousands To Go