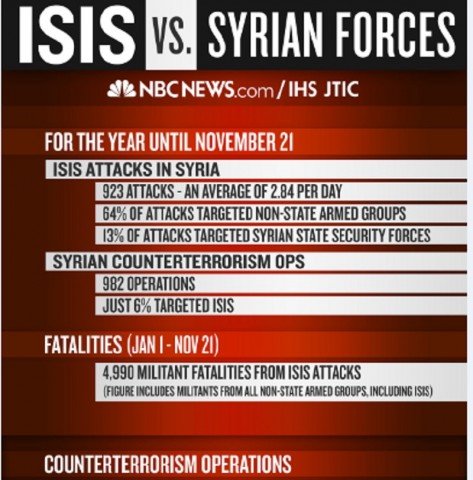 Assad, ISIS Have Been ‘Ignoring’ Each Other on Battlefield, Data Suggests

December 12, 2014 8:23 am 0
We Will Never Forget
Arab Americans Must Vote for Romney
Syrian Moderates Escalate Attacks Against Assad in Daraa

Syria’s military and ISIS may be sworn enemies but instead of wiping each other off the battlefield they have been delicately dancing around each other, according to new data exclusively obtained by NBC News.

Both sides in the bloody conflict appear to be eliminating smaller rivals ahead of a possible final showdown.

Around 64 percent of verifiable ISIS attacks in Syria this year targeted other non-state groups, an analysis of the IHS Jane’s Terrorism and Insurgency Center’s (JTIC) database showed. Just 13 percent of the militants’ attacks during the same period — the year through Nov. 21 — targeted Syrian security forces. That’s a stark contrast to the Sunni extremist group’s operations in Iraq, where more than half of ISIS attacks (54 percent) were aimed at security forces.

“In Iraq, it’s a very clear insurgency: them against the Iraqi state,” said Matthew Henman, head of JTIC. “In Syria, it’s a different situation because you have such a proliferation of competing, non-state armed groups in the country in addition to Assad.”

Syrian President Bashar Assad has been accused of encouraging the rise of Islamist extremist groups, like ISIS, in order to discredit opposition to his rule. He lashed out at the suggestion in a recent interview with Paris Match, describing ISIS as an enemy and saying that the “army is winning” its fight against terrorists.

Henman said the figures suggest ISIS and Assad’s security forces have embraced the “clever strategy” of mostly “ignoring each other.”

For now, ISIS appears focused on emerging as the dominant Islamist, non-state actors and operating in areas where Assad’s troops have largely withdrawn. Assad is focused on destroying opposition to his rule from the same groups ISIS wants to dominate — and engaging more in recent months with ISIS as that comes to pass.

“They both recognize there’s a mutual benefit in crushing other groups,” Henman said. That’s because eventually ISIS is going to have to take on Assad’s government — and both sides want the battlefield to be clear of other potential competitors.

“It’s a confrontation that’s coming — and both sides know it,” he added.

Just ask Abu Hafs, a local ISIS leader from Aleppo who is intent on expanding the militants’ Islamic state —or caliphate.

“We are not ignoring the Syrian regime but we are focusing on the rebel areas,” he explained to NBC News. “You can’t jump to step two. You have to do the first step first. To fight successfully against Bashar Assad’s regime, we must first take over the rebel areas.”

That doesn’t mean his fighters haven’t directly fought the regime. Abu Hafs said they had “achieved great victories,” such as taking over the Tabqah military airport.

“We are fighting for the expansion of the Islamic caliphate area to include all the liberated areas and also the regime areas,” he added.

For the year until November 21, ISIS carried out at least 923 verifiable attacks in Syria — an average of 2.84 per day. During that time period, ISIS attacks resulted in the deaths of 4,990 militants — including its own fighters.

Some rebels suspect coordination between the Syrian regime and ISIS. Yusuf Abu Abdullah, one of the leaders of the Al-Mujaheddin Army in Aleppo, said when his fighters have attacked regime bases, they have come under separate attacks from ISIS. That’s forced them to withdraw and battle the other militants instead of Assad’s forces.

“Most of the front lines between ISIS and the regime are very quiet — you wouldn’t even hear the sound of firing,” he said. “The exact opposite is on our frontlines, which are very dangerous and where the fights don’t stop for 24 hours.”

If ISIS was interested in fighting the regime, he said, they would have gone to Aleppo — a city besieged by Assad’s forces. Instead, they chose to fight for Kobani where there is no Syrian army presence.

“Kobani revealed ISIS and showed to the world that this terrorist organization doesn’t seek to fight the regime, but is trying to kill the rebels and end the Syrian revolution, Abu Abdullah said.

Signs are emerging that the final showdown may soon be approaching. In the past several weeks, Assad’s forces have been stepping up their attacks against ISIS. The Britain-based Syrian Observatory for Human Rights said it had documented more than 2,000 regime airstrikes around Syria in the past 50 days. It said Wednesday that nine airstrikes hit an ISIS regional office in the eastern countryside of Deir Ezzor.

The information provided from the IHS Jane’s Terrorism and Insurgency Center Database was mined from open sources and double-sourced wherever possible to ensure the greatest level of accuracy. It does not include information from social media that cannot be verified through conventional and trusted news sources.

Assad, ISIS Have Been ‘Ignoring’ Each Other on Battlefield, Data Suggests