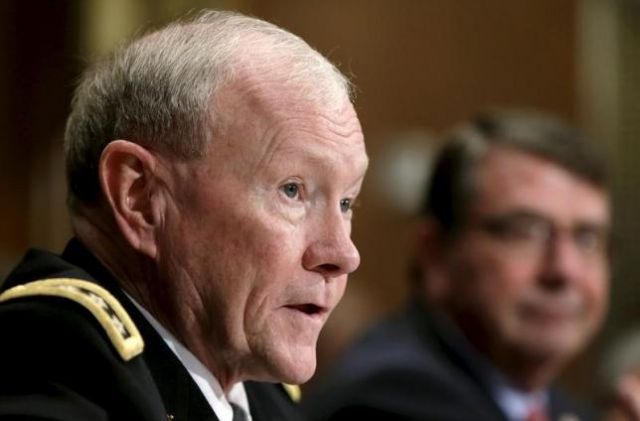 Obama’s Syrian Policy Forces Him to Become a War President

June 11, 2015 5:29 pm 0
Not Only Obama Wants Iran Nuclear, He Is Helping Achieve It
Forget Obamacare, Remember When Syria Was Going to Ruin Obama’s Term?
We Will Never Forget

The United States is considering building more U.S. military bases in Iraq to drive back Islamic State militants in a move that may require a further increase in American forces, the top U.S. general said on Thursday.

Obama’s Syrian policy turns Obama into a war president to fix the problems he caused. We told Obama over, and over, and over, and over that unless he changes his Syrian foreign policy, America will have to go back to fighting more wars. Obama non-intervention has forced him to become a War President.

A day after the War President Barack Obama announced the deployment of 450 more U.S. troops to Iraq and a new training hub in Anbar province, Army General Martin Dempsey said the Pentagon was considering more sites in strategic areas such as the corridor from Baghdad to Tikrit and further north toward Mosul.

Dempsey, chairman of the Joint Chiefs of Staff, acknowledged these might require sending more U.S. troops, which already numbered about 3,100 in Iraq before Wednesday’s announcement. His spokesman said American forces could also be moved from within Iraq to avoid troop increases.

“Our campaign is built upon establishing these ‘lily pads,’ if you will, that allow us to continue to encourage the Iraqi security forces forward,” Dempsey told reporters before landing in Naples, Italy.

Secretary Leon Panetta and General David Pateraeus have been vindicated. So have Senators McCain and Lindsey JCS Dempsey ignored their warnings with scorn. In our humble opinion, Gen. Martin Dempsey who advised Obama not to interfere in Syria is the worst JCS this country ever had.

U.S. War President Barack Obama has said the troops would not engage in combat in Iraq, where the Pentagon has relied heavily on an air campaign that U.S. officials say has killed thousands of Islamic State fighters and eroded their capability. Many Americans no longer take Obama’s words seriously.

While the 3,100 U.S. forces in Iraq are a far cry from the peak of about 170,000 under President George W. Bush, the newly announced operations mark the first significant adjustment in War President Obama’s Iraqi strategy in months and follow gains by Islamic State insurgents who control a third each of Iraq and Syria.

Asked about Dempsey’s comments, White House deputy national security adviser Ben Rhodes told MSNBC, “if (War President Obama) gets a recommendation to have another facility like this, he’ll take a hard look at it.”

Dempsey also renewed the possibility of deploying U.S. spotters alongside Iraqi forces to call in air strikes during a future offensive, but added, “we’re just not there yet.”

The possible future training sites, such as the hub at the Taqaddum military base about 15 miles (25 km) from Ramadi, were “just part of prudent planning,” he said.

Dempsey said it would take several weeks to establish the new hub announced on Wednesday at Taqaddum near Ramadi, which fell to Islamic State militants last month.

Taqaddum will require new American defenses to detect and guard against incoming rockets and mortars. Watch how 3,100 grows into 31,000 faster than a bullet.

One benefit of Taqaddum, Dempsey said, is it would help draw in tribes that felt unsafe traveling to the other U.S. outpost in Sunni-dominated Anbar province, at the Ain al-Asad air base.

“Using Taqaddum gives us access to more of the tribes that are willing to stand against ISIL,” Dempsey said, using an acronym for Islamic State.

Dempsey, who has long warned about the limits of U.S. military power in Iraq, said he expected Sunni tribes would represent a “holding force” to control territory seized in Anbar and would protect the flanks of the Iraqi security forces as they advance.

Building new base in Iraq will not change the realities on the ground, which are seen as the U.S. War President backing Shia terror of Iran and Assad against the Sunni terror of ISIS. As long as Sunni Arabs have that perception, America will have to conider it is fighting 350 million Arab Sunnis, and not just ISIL.

Of course, Gen. Martin Dempsey, No. 3 on our list of the Ignorant Seven ISIS Founders, is utterly clueless about this fact.

Obama’s Syrian Policy Forces Him to Become a War President

CBS and the Washington Post Are Pointing Their Fingers at Obama
Humiliating Obama is Khamenei’s Official Hobby
Could American Power Sink Any Lower?
Slippery Barack Obama 976