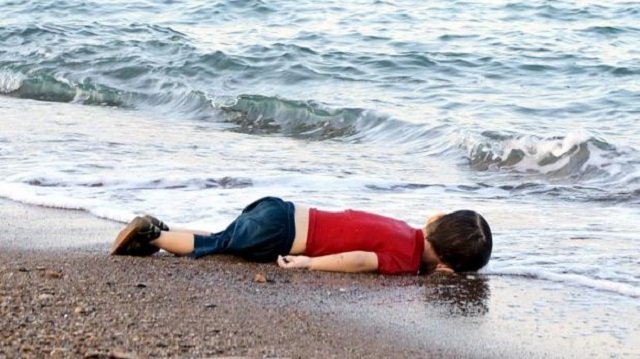 Aylan Kurdi is a Victim of Obama’s Iran Deal

September 3, 2015 11:21 am 6
The ‘What If …’ Questions We Should Ask About the Iran Deal
Iran After the Nuclear Deal: Change We Can’t Believe In
Retired generals and admirals urge Congress to reject Iran nuclear deal

If President Obama has the guts to quit his golf for a moment and take a long hard look at the tragic image of Aylan Kurdi, the Syrian toddler refugee who perished on the shores of Bodrum, he might realize this little boy represents his policy in Syria and the Iran Deal that drove that policy.

Aylan Kurdi is a victim of your Iran Deal Mr. President.

Barack Obama never lifted a finger to stop the Syrian civil war except to render lip service to the whole tragedy. Why? Because Barack Obama did not want to upset the terrorists in Tehran he was trying to sway to sign a useless bad deal with.

The Mullahs saw in Obama a weak and ignorant U.S. President who could be strategically outmaneuvered at every level (Read Harold Rhode excellent article on this subject here). To please them, Obama refused to depose Assad or even help the moderates depose him early on. The result is not only the largest refugee tragedy the world has witnessed in the 21st century, but also a sectarian war now attracting thousands of extremists the world over.

If it was not for Barack Obama, ISIS would not exist to drive Aylan Kurdi and his family out of Kobani.

The death of Aylan Kurdi is on Barack Obama.

Aylan Kurdi is a victim to a bad Iran Deal.

Aylan Kurdi is Obama’s legacy painted in blood and tears.

This is the honest truth.

People who see the Syrian civil war from the prism of intended consequences also see Barack Obama palm print on Syria’s tragedy. The president never acted to save Syria from its destruction because the Mullahs were the ones setting the Syrian policy at the White House.

On all Middle East matters, what pleased the Mullahs in Tehran also pleased Barack Obama. The synchronization between what Obama wants and what the Mullahs want is simply magnificent. The result is a whole country destroyed with millions of refugees the world seems oblivious to their fate.

Obama let it happen and Obama should be held accountable for the ultimate death of Aylan Kurdi.

Just wait and see how many more are going to die because of this cursed Iran Deal.

Aylan Kurdi is a Victim of Obama’s Iran Deal