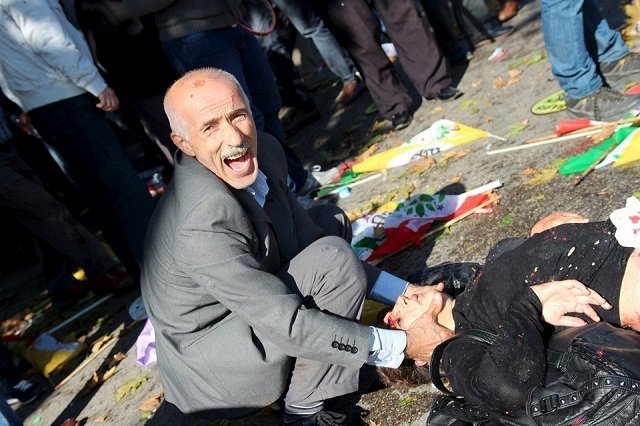 February 18, 2016 3:32 pm 0
Netanyahu: Iran Deal Will Fuel Terrorism
Fight Back Obama On His War-mongering Accusation
Iran Deal is About Right and Wrong, Not Left and Right

It is hard not to conclude that the Ankara terror act that took the lives of 28 people many of whom are innocent civilian bystanders was not an Archduke Ferdinand spark whose purpose is to instigate a new civil war in Turkey. While Ankara accused the YPG to be behind these attacks, who is instigating a Turkish civil war to split the country a la Syria? Who is backing YPG actions with weapons and support? This is Obama’s Iran Deal part deux unfolding.

Just to insure Turkish response creates the conditions for a civil war, today, another terror act followed soon in south-east Turkey against another military convoy. Also, committed by Kurdish separatists the Assad regime is relying upon for his battle against legitimate rebel forces.

If you have followed the actions of Obama’s Pentagon in Syria’s civil war, you would know that the US has been air dropping weapons and supplies to the YPG Kurds in the north in order to, supposedly, battle ISIS. Somewhere along the line, the YPG has turned its guns against legitimate rebel forces, in support of Assad, just as Russia did while claiming it was battling ISIS. Today, Barack Obama is helping YPG to defeat Assad’s enemies, but also to instigate a Turkish civil war.

Why would the YPG risk retaliation from Turkey, a military powerhouse, if it did not have superpower support for its actions inside Turkey?

The fact the YPG is fighting by Assad’s side against the rebels, which is yet the clearest sign that Obama is now protecting Assad by air dropping supplies to Assad’s allies, is finally lifting the fog upon Obama’s mysterious Syria policy, Turkish policy, and Europe’s policy. If you think a Syrian civil war flooded Europe with refugees, watch how Obama is going to destroy Europe with Turkish refugees.

Obama’s game, from the start, was always to deceive everyone into believing he supports the Syrian rebels when in fact, his only game is to destroy US allies in the Middle East with Putin by his side. His bigger game is to destroy Europe, which we believe will begin with a Turkish civil war. The crowning achievement of Barack Obama is his Iran Deal. The more important part is his Iran Deal part deux.

In the happenstance we did not mention it before, we believe Barack Obama to be a sleeper cell planted by the Russians just for this moment in history. Welcome to the Iran Deal part deux intended to harm NATO and Europe together after its first part was intended to harm Israel and Saudi Arabia. Israel, on a delayed basis, because Obama could not muster enough power to cause immediate harm, and because Benjamin Netanyahu fought back with courage and determination.

Unfortunately, there is no Benjamin Netanyahu-like figure in Europe today to stand-up to Barack Obama and Vladimir Putin’s partnership to destroy the continent.

Obama promised Iran a free hand in the Middle East to destroy Israel and Saudi Arabia, and Putin promised Obama, for his support, the decimation of the West Obama hates with passion.

Their combined treachery just dawned on Angela Merkel who began demanding a non-fly zone in Syria after refuting it for many years. Those Turkish refugees, if Obama and Putin succeed in starting a Turkish civil war, will destroy Germany.

The YPG is fighting by Assad’s side, yet it has received weapons from the United States. If this relationship does not explain the treachery of Barack Obama in supporting America’s enemies, nothing will. A Turkish civil war will bring hell to the region, but more importantly destroy Europe from within. Obama’s plans for Europe started the day he sent back a White House Churchill bust to the British. That was the signal of his intentions in 2016 we all missed.

Maybe this is why Turkey finds it necessary to have closer relationships with Israel to stop Obama and Putin, and Putin finds their rapprochement unacceptable.

We are going to be always behind the curve when it comes to understanding what Barack Obama’s real intentions are because they are so unreal, it challenges every cell of our logic. We need to start expecting the worst to begin to understand his deadly moves against everything America stands for. As long as people discount what looks like an extreme Obama position, he will keep forging ahead with his plans to destroy the West.

As Barack Obama let a raging Syrian civil war concoct his Iran Deal, in 2016, it seems, he is intent on starting another civil war in Turkey to split NATO and Europe apart.

Putin Will Yet Siphon The Iran Deal Funds From Khamenei
Aylan Kurdi is a Victim of Obama’s Iran Deal
Iran After the Nuclear Deal: Change We Can’t Believe In
Opinions 795 Slippery Barack Obama 947