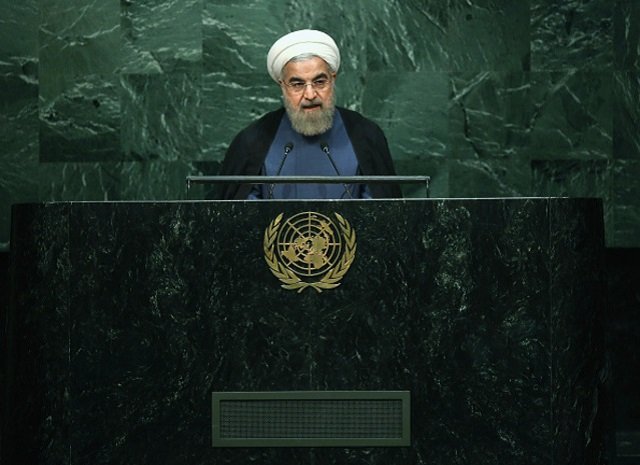 Iran After the Nuclear Deal: Change We Can’t Believe In

Source: Bloomberg View – by Eli Lake (Iran After the Nuclear Deal: Change We Can’t Believe In)

Iran’s hardliners have had themselves quite an “implementation week.” As the U.S. and Iran ironed out the final details of a prisoner exchange and coordinated the implementation of the complex nuclear deal, the Islamic Republic’s deep state went on a spree.

First they boarded two U.S. Navy boats at gunpoint. Then they tried to detain the mother and wife of one of the hostages they were releasing. Topping that, on Sunday Iran’s hardliners voted to disqualify nearly all of President Hassan Rouhani’s political allies from running in next month’s parliamentary elections.

The disqualifications are a blow to President Barack Obama and European leaders who had hoped the accord would benefit Iran’s moderate (by comparison) president. Much of U.S. strategy in the nuclear talks has been aimed at strengthening perceived moderates in the hopes of weakening perceived hardliners. This was Obama’s argument to Congress when he urged Democrats to oppose sanctions on Iran. Privately, U.S. officials have pointed to February’s elections as a chance for Iranians to give the nuclear deal popular legitimacy inside Iran.

Now it looks like Iranians won’t have this chance. Amin Tarzi, the director of Middle East studies at Marine Corps University, told me Tuesday that “the vast majority of Rouhani’s candidates have been disqualified.” While Rouhani himself has said he will appeal these decisions, Tarzi does not anticipate most of these disqualifications will be overturned.

“Because of Khamenei’s health, the factions in Iran that are loyal to the Revolutionary Guard do not want to take the chance that the next supreme leader will not be one of them,” Tarzi told me. “They don’t want Rouhani and his faction to benefit from the fruits of the nuclear deal. The gloves are off now.”

This is particularly bad news for Secretary of State John Kerry. Kerry is hoping that Rouhani’s foreign minister, Javad Zarif, will have the flexibility to reach a political agreement to stop the fighting in Syria in Obama’s final year. But a parliamentary election that empowers radicals will not help. If anything, it will embolden the elements in Iran’s state that want to humiliate the U.S. and their domestic rivals who struck the bargain with the Great Satan in the first place.

Karim Sadjadpour, a senior associate at the Carnegie Endowment for International Peace and an expert on Iran, told me the U.S. should not be surprised by the disqualifications. “Implementation of the nuclear deal was expedited in order to try and help moderate factions in the Majles and Assembly of Experts elections,” Sadjapour said. “What people repeatedly fail to understand is Iranian elections are heavily rigged in advance. The Venn diagram of politicians who are genuinely popular and permitted by the Guardian Council to run is extremely small.”

Suzanne Maloney, the deputy director of the foreign policy program at the Brookings Institution, told me Tuesday that U.S. options are limited. “I don’t think we can or should be in the business of trying to influence Iranian elections because we just don’t have the dexterity or the reach to influence Iranian politics,” she said.

Maloney also pointed out that even if Rouhani’s allies did gain more seats in Iran’s parliament, recent history suggests this wouldn’t matter much anyway. In 2000, reformers aligned with President Mohammad Khatami won major gains in the parliament, but in the years that followed, Khatami’s reforms were stymied and his powers were eroded. At the time, Rouhani was on the side of the hardliners who opposed Khatami.  Today most of the Iranians who supported reforming Iran’s political system to allow greater freedoms for Iranians are either in jail or exiled.

Nonetheless Sadjapour said it is too soon to say whether the nuclear deal would help to open up Iranian society in the long run. “A decade from now it’s plausible that the nuclear deal will have played an important role in facilitating political change in Iran,” Sadjapour said. “But the forces of darkness in Iran are deeply entrenched and aren’t going to step aside without a fight.”

Those forces have been on a roll since Iran agreed in July to the nuclear accord. Since then, Iran has tested two ballistic missiles, detained two Iranian-Americans, allowed mobs to sack the Saudi Embassy, boarded two U.S. Navy boats in distress and now disqualified Rouhani’s allies from running for the parliament.

This dynamic played out on Twitter on Tuesday. The account of Iran’s supreme leader, Ayatollah Ali Khamenei, tweeted the following message to Rouhani: “Removal of economic sanctions alone is not enough for boosting economy and improving lives of people.” In an open letter to Rouhani sent over the weekend, Khamenei warned of Western efforts to infiltrate Iranian society through democratic “color revolutions.”

This message stands in contrast to Obama’s more hopeful words about the nuclear deal. On Sunday the president said: “Following the nuclear deal, you — especially young Iranians — have the opportunity to begin building new ties with the world. We have a rare chance to pursue a new path — a different, better future that delivers progress for both our peoples and the wider world.”

Iran After the Nuclear Deal: Change We Can’t Believe In