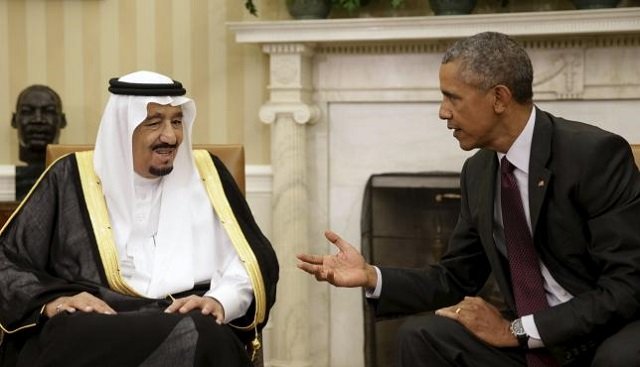 September 4, 2015 7:09 pm 0
Iran After the Nuclear Deal: Change We Can’t Believe In
The Iran Deal is the Root Cause of Most Terror Acts
Oops: Turns out the Iran deal breaks the law

But behind the warm public welcome, there are deep disagreements and Saudi misgivings on Syria and Yemen as well as lingering Saudi doubts about the nuclear deal with Iran.

Obama acknowledged only that the two sides would have much to discuss.

“This is obviously a challenging time in world affairs, particularly in the Middle East,” Obama said, saying the pair would discuss a “wide range of issues.”

Obama said the two sides “share concerns” about the need to restore a functioning government in Yemen and relieve an urgent humanitarian crisis.

Obama also said that the pair “share concerns about the crisis in Syria and will have the opportunity to discuss how we can arrive at a political transition process within Syria that can… end the horrific conflict there.”

Obama only utters the word “Syria” when he has to. After Salman leaves, Syria will be erased from his lexicon.

But Saudi Arabia’s backing for opposition groups like Jaysh al-Islam, an amalgam of factions that include hardline Islamists, has concerned the White House.

“The kingdom sees the conflict against the Iranian-supported Assad regime as an extension of the wider Persian-Arab rivalry” said Simon Henderson of the Washington Institute for Near East Policy.

Ahead of the meeting senior Obama foreign policy aide Ben Rhodes said the White House wants to make sure both countries “have a common view” on which Syrian opposition groups get support.

Ben Rhode talking about supporting the Syrian opposition is tantamount to Groucho Marx being unable to crack jokes. Rhode is relentless with his lies.

“We are looking to isolate more extremist elements of the opposition, that’s been an ongoing conversation with Saudi Arabia,”

In other words, it is OK if the terrorist organizations Hezbollah and the IRGC stand by Assad, but it is not OK for Saudi Arabia to support Islamist factions as a counterbalance to Hezbollah’s terror.

Iran After the Nuclear Deal: Change We Can’t Believe In
Oops: Turns out the Iran deal breaks the law
The ‘What If …’ Questions We Should Ask About the Iran Deal
Support U.S. Allies 152