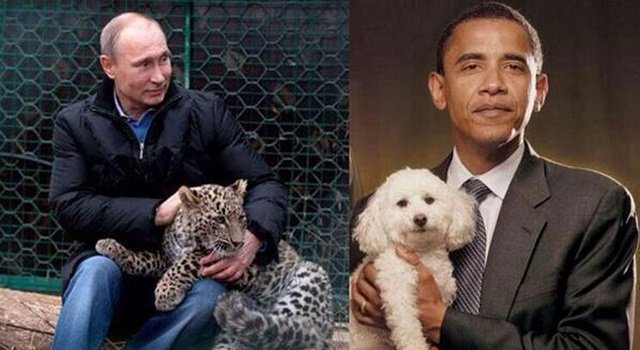 Obama Shooting the Breeze Over Syria

October 3, 2015 7:50 am 0
Obama Nixed CIA Plan That Could Have Stopped ISIS
Help the Iranian Opposition
Fight Back Obama On His War-mongering Accusation

U.S. President Barack Obama warned Russia on Friday that its bombing campaign against Syrian rebels will suck Moscow into a “quagmire,” after a third straight day of air raids in support of Baschar al-Assad.

Obama’s interpretation of ‘Quagmire’ is not how the world interprets it. World leaders know enough about Barack Obama to realize he means nothing by it. This is not a threat because Obama is happy to see Putin clean Syria for him.

Obama shooting the breeze over Syria.

Friday prayers were canceled in insurgent-held areas of Syria’s Homs province hit by Russian warplanes this week, with residents concerned that mosques could be targeted, according to one person from the area.

Putin’s decision to launch strikes on Syria marks a dramatic escalation of foreign involvement in a more than four-year-old civil war in which every major country in the region has a stake.

It also gives fuel to domestic critics of Obama who say his unwillingness to act on Syria has allowed Moscow to stage its biggest show of force in the Middle East in decades.

But the U.S. president warned that Russia and Iran, Assad’s main backer in the Muslim world, have isolated the majority of Syrians and angered their Sunni Muslim neighbors.

“An attempt by Russia and Iran to prop up Assad and try to pacify the population is just going to get them stuck in a quagmire and it won’t work,” Obama said.

Obama’s interpretation of ‘Quagmire’ is not a threat against Putin. Obama shooting the breeze over Syria.

The Syria campaign is the first time Moscow has sent forces into combat beyond the frontiers of the former Soviet Union since the USSR’s disastrous Afghanistan campaign of the 1980s, a bold move by Putin to extend Russia’s influence beyond its neighborhood.

It comes at a low point in Russia’s relations with the West, a year after the United States and EU imposed financial sanctions on Moscow for annexing territory from Ukraine.

Obama on Friday offered to work with Russia to bring peace to Syria, but he took several digs at Putin, with whom he has a frosty relationship. A meeting between the two at the United Nations this week seems to have done little to produce a thaw.

“Mr. Putin had to go into Syria not out of strength, but out of weakness because his client Mr. Assad was crumbling and it was insufficient for him to send arms and money,” Obama said.

He played down international support for Moscow’s strategy, saying it paled in comparison to the number of countries backing U.S. air raids on Islamic State.

Obama Shooting the Breeze Over Syria