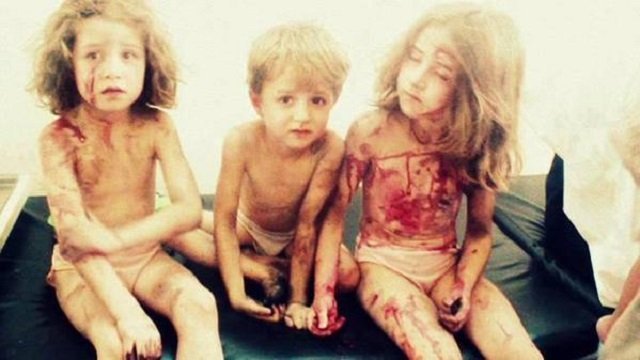 TFS Note: Providing the antiaircraft missiles to the Free Syrian Army will be Obama’s ultimate test about whether he wants to see Assad deposed or whether he is just playing us all. No excuses anymore. He has his Iran Deal.

U.S.-backed rebels in Syria appealed to the Obama administration Friday for anti­aircraft missiles to defend their positions against relentless Russian airstrikes that have so far mostly targeted the moderate opposition to President Bashar al-Assad’s rule.

A joint statement issued by the United States and other Western allies who have collectively aided moderate rebel units urged Russia to stop targeting moderate rebels and “to focus its efforts on fighting ISIL,” the acronym referring to the Islamic State.

U.S. officials indicated that there is no immediate plan to offer additional assistance to the rebel units that have been armed and trained under a covert CIA-led program aimed at supporting moderate groups and weakening Assad’s hold on power.

The covert operation is separate from a much-publicized Pentagon program to train a force to fight the Islamic State that has so far produced no more than four or five loyal fighters, and it is widely credited with having helped rebel advances­ over the past six months in the areas now being targeted by the Russians.

Russian warplanes sustained their bombardment of rebel positions in northern Syria for a third day Friday, and for the first time, the Defense Ministry in Moscow said the strikes also hit targets in the heart of Islamic State territory, in the north-central Syrian province of Raqqa.

But continued airstrikes Friday suggested that Russia’s main priority remains the anti-Assad rebellion in northern and western Syria, which poses a greater threat to the regime’s control over Damascus, the capital, than the forces­ of the Islamic State, concentrated in the far north and east of the country.

The attacks by Russian warplanes on the provinces of Hama, Homs and Idlib “did not target Daesh,” said the joint statement by the United States and its allies, using the Arabic acronym for the Islamic State. “These military actions constitute a further escalation and will only fuel more extremism and radicalization.”

The statement was signed by the governments of the United States, France, Germany, Qatar, Saudi Arabia, Turkey and the United Kingdom, which have collectively participated in the effort to arm and train moderate rebels through joint operations centers in Turkey and Jordan.

One of the groups that has received weapons and training under the program said its positions in the Hama town of Latamneh were hit by 15 bombs Friday, the third and heaviest consecutive day of strikes against the town. Although Russian officials have insisted that their attacks are only targeting the Islamic State, the al-Qaeda affiliate Jabhat al-Nusra or “other” terrorist organizations, no other military group is present in the town, according to Capt. Mustafa Moarati, a spokesman for the Tajamu al-Izza rebel brigade.

He said a video released by the Russian Defense Ministry on Thursday purportedly showing the destruction of an Islamic State headquarters in fact was of a command center of the U.S.-backed group. The Russians are using Su-34 warplanes that are more sophisticated than any in the existing Syrian air force, enabling a more accurate delivery of higher-ordnance missiles than had been the case when Syrian warplanes were bombing, he said.

“They are doing this for two reasons. Firstly, because we are friends with the United States and they want to challenge the United States. And secondly, to vanquish the Free Syrian Army on the ground to show the world that only extremists are fighting Assad and that therefore he should survive,” Moarati said, moments before a huge explosion interrupted the call with him.

It was the second Russian strike of the day and the sixth in three days, he said, later adding that 13 more strikes followed. He said his unit has already received TOW anti­tank missiles from the United States under the covert program. Unless it also receives antiaircraft missiles, his unit is in danger of being eliminated, he said.

“At least they could give us anti­aircraft missiles,” he said.

Hassan Haj Ali, the commander of Suqour al-Jabal, another U.S.-backed group targeted by Russian strikes Thursday, said that unless the United States offers help to the rebels it has supported so far, there is a risk of further radicalizing rebels who have so far adhered to the moderate demands of the 2011 uprising against Assad’s rule. He said he had not received any response to a request for help from the United States, relayed through intermediaries, who said they would consult with U.S. leaders.

“We need one of two things. Either a clear policy from the United States to prevent Russia and the regime from bombing Syrians, or otherwise they should send us anti­aircraft missiles so that we can confront the Russian planes,” he said, speaking from the main front line between rebels and the Islamic State in the northern Aleppo town of Marae.

“If they don’t help us, people will lose trust in our supporters, and this will increase extremism,” he added.

A U.S military official said the request was under consideration. Repeated requests by U.S.-backed rebels to be supplied with anti­aircraft missiles to be used against Syrian aircraft have been repeatedly refused in the past.

“It’s a complicated question and an even more complicated answer,” said the official, speaking on the condition of anonymity to discuss the matter freely. “Any decisions that we make, there are going to be ramifications,” not just for the United States but also for Washington’s partners in the military coalition against the Islamic State, he said.