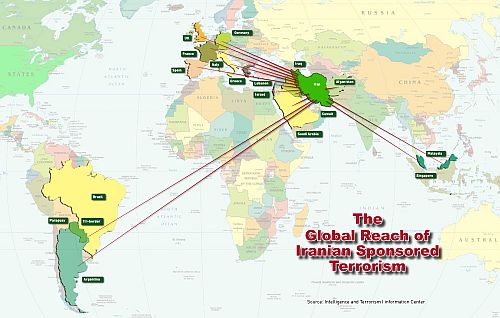 May 18, 2015 6:23 pm 0
Iran vows to step up fight against Syrian civilians
King Salman Should Call Obama’s Bluff
Just do the opposite

By negotiating with Iran as the Mullahs expand their influence and terror networks, the Obama administration has legitimized the Iranian regime. It gave the terror masters in Tehran diplomatic cover and political gravity.

All because Obama is adamant about pursuing a nuclear deal everyone knows Iran would not honor.

The worst part about Obama legitimizing Iranian terror is that if it had not been for the Gulf countries threatening to start their own nuclear program, Obama would have never even mentioned the words “Iran” and “instability” in the same sentence. Obama could care less if Iran is funding and arming terrorist organizations around the Middle East. He kept quiet about the Houthis until the Saudis began bombing their positions in Yemen.

What should anyone expect from this president when asked about the Syrian civil war but to say that it will last past his tenure? He has unwillingly provided Iran with a green light to occupy four different Arab countries during his presidency by ignoring Iran’s horror shows as he pursues his deal. Last on the mind of this president is to keep Iranian violence in check in spite of the promises he made to the leaders of the Gulf Arab countries who met with him last week at Camp David.

All the violence and the destruction before us in the region is the result of Iran emboldened by Obama’s willingness to ignore their destructive behavior. All the deaths of innocent women and children is the result of violence Obama is unwilling to end even with threats.

The last threat he issued unleashed more gas attacks by the Assad regime because he reversed course. In doing so, he sent a signal to Assad that gassing civilians is OK by him. As Obama legitimizes Iranian regime, he is also legitimizing the persecution of civilians.

The civil war in Syria continues because of rivalry between Saudi Arabia and Iran; it also continues because Vladimir Putin of Russia believes the Assad family is the perfect spoiler tool to harm U.S. interests. Any other U.S. President would have not permitted Putin to act solo without dear consequences to pay, and without a public confrontational stand to assert U.S. power.

Obama cannot find the guts to stand up to Putin or Khamenei even if he wanted to.

Obama’s legitimizes Iranian terror will come back to haunt us all. Count on another U.S. war, with U.S. boots, in the Middle East before 2020.