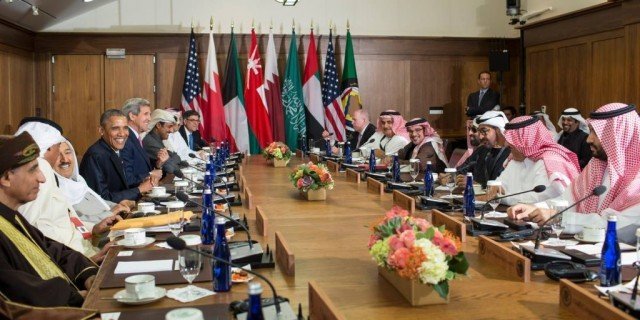 Obama GCC Summit: Who is Lying to Whom?

May 15, 2015 7:28 pm 0
Clinton Criticizes Obama on Syria
The Magic of Losing One’s Legitimacy
White House Occupants Who Believe They Won a Vacation

After the Obama GCC summit at Camp David, all parties issued a common press release that painted a rosy picture of cooperation and dandyness (Webster, take note please).

In general, the GCC leaders are not impressed by Obama’s dressed-up words or his habit of making statements that are untrue. This is why four out of six leaders preferred to stay home. They know he harbors a special amicability towards Iran partially because he believes Iran can save his legacy and partially because of his enmity towards Israel. It is no accident that the country Obama wants, badly, a detente with is also the same country that is intent on destroying Israel.

The Obama GCC summit was more about who is lying more to whom than about understanding and cooperation. Obama hailing it a success is simply not true. Here is why.

Why did they come to the Obama GCC summit?

One can summarize the Gulf countries’ grief with Iran by understanding their mindset. Foremost on their mind is their security after watching Iran interfere in Syria, Iraq, Lebanon, and Yemen to occupy all four countries.

They regard security as a two-prong approach, One deals with American guarantees for that security and the second deals with access to advanced U.S. weapons, like the F-35, the U.S. is unwilling to sell in order for Israel to maintain a superior military edge.

Second on their mind is containing Iranian expansionism of which Yemen, Syria, and Lebanon become a subset of that request.

While Obama has hailed the meeting a success, there were no substantive announcements to back his claim. No security pact, no weapons, and no relief for Syria in the form of a humanitarian no-fly zone.

As far as a guaranteed security pact, Obama may have offered only a promise. Most likely, the Gulf leaders were not that impressed. They left empty-handed.

Lastly, there were no announcements made with regard to Iran expansionism except what al-Arabiya published:

On Iran, which many Gulf countries see as a regional threat, Obama said that plans had been made for “joint capabilities to address destabilizing activities and conflicts in the region, some of these are related to concerns surrounding Iran.”

No security pact, no weapons, and only a “joint capabilities to address Iran”, which could mean anything from annual conferences to discuss the problem to meetings between heads of states to a task force to analyze and study Iranian meddling in depth.

Where is the success in the Obama GCC summit?

Is it possible the President made some meaningful gesture towards the Gulf leaders he does not want Iran or Israel to know about? It is possible. We will find out more as Op-Eds begin to publish in the next few weeks in the major Arab media. Aggressive Op-Eds mean the lying continues and Obama’s claim of success is just pure spin.

Our overall sense here at RPS is that the Obama GCC summit was about who is lying to whom. Obama with promises he does not intend to keep or the Gulf countries with assurances they are on-board with his Iranian deal they do not intend to honor as long as Iran predatory practices remain a danger to their security.

We will find out soon enough.

Obama GCC Summit: Who is Lying to Whom?

Limit Obama’s damage by voting for anyone but a Democrat
The Mother of All Stalemates in Syrian Civil War
Understand the tragedy of Barack Obama
Slippery Barack Obama 976 Support U.S. Allies 152