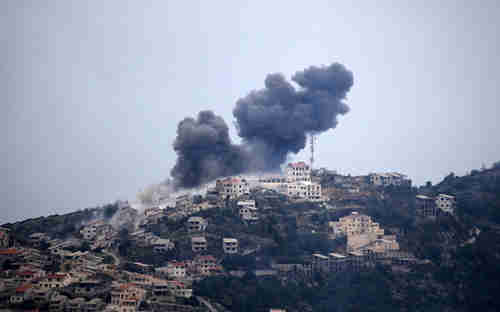 April 8, 2015 5:22 pm 0
Easy Steps to Act as a Leader (Not necessarily be one)
Rubio explains Obama’s failures
Vetting the Syrian opposition

It was just last year that Syria’s Bashar al-Assad was claiming that, in 2015, his army would defeat all terrorists and their supporters in Syria, blaming the terrorism on Israel and its allies.

Blaming Israel for the rise of Islamic State (IS, ISIS, ISIL, Daesh) and Jabhat al-Nusra (al-Nusra Front) in Syria would have to be considered at best a fantasy and at worst a delusion. But the promise of victory in 2015 is perhaps the biggest self-delusion of all, and appears less and less likely each week.

A major turning point in the international perception of al-Assad’s army occurred a couple of weeks ago, when the regime’s army suffered a major military setback and was defeated by Jabhat al-Nusra, which captured Idlib. That was in northern Syria. Al-Assad’s army is faring no better in southern Syria, where ISIS captured Syria’s Yarmouk refugee camp,putting ISIS within a few miles of al-Assad’s seat of power in Damascus.

Al-Assad’s reaction to those defeats is to bomb both Idlib and Yarmouk. Bombing these cities will be very effective in killing innocent women and children, but will do very little to stop the advance of al-Nusra and ISIS.

New reports indicate that these two defeats are not flukes, and that al-Assad’s army is badly fracturing.

Al-Assad is a member of the Shia Alawite race, which broke away from mainstream Shia Islam in the ninth century. Since many of the forces that al-Assad’s army is fighting are Sunnis, al-Assad does not trust Sunnis in his own army, for fear that they will defect to the other side.

The result is that Alawites form the bulk of al-Assad’s army, and are suffering the bulk of casualties, even though they are only a tenth of Syria’s population.

The figures are staggering. There were about two million Alawites at the start of the war, with perhaps 250,000 men of fighting age. Today, as many as one-third of these are dead. Over 22,000 al-Assad soldiers and militiamen were killed in 2014 alone, the bulk of them Alawites.

When ordinary Alawite soldiers die in al-Assad’s army, their corpses are returned to their homes piled up in plain pickup trucks. They are followed by the “press gangs”: military recruiters raid Alawite houses to find replacements, and force them into the army.

The result is that the Alawites are trapped — hated by the Sunnis for joining the army and killing Sunnis, but unable to escape the clutches of the press gangs.

This explains why al-Assad’s army appears to be collapsing. At the beginning, al-Assad promised the Alawites quick victories and rich rewards. Those promises have gone the way of “you can keep your doctor.” Today, the Alawites do not wish to be in the army, and probably couldn’t care less who’s in control of Idlib or Yarmouk.