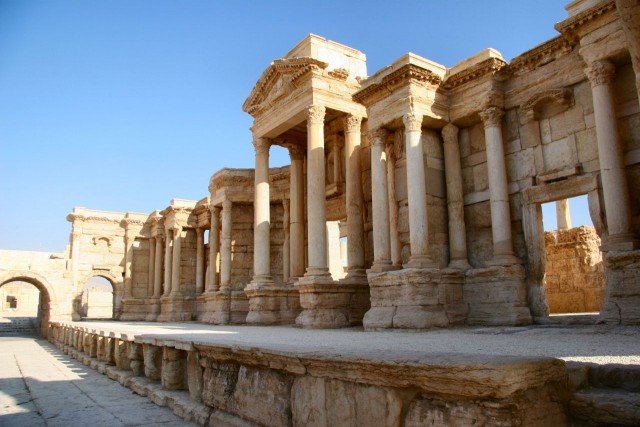 May 15, 2015 8:10 pm 0
Responding to Jimmy Carter Ugly Opinion
The Gates of Hell
The culture of extreme violence

Terrorists from the Islamic State jihadist group executed at least 23 civilians on Friday as they advanced towards Syria’s ancient desert metropolis of Palmyra, activists on the ground told AFP.. Those killed were family members of government employees and Syrian government informers.

The activists said nine children were among the 23 shot dead by IS militants near the UNESCO world heritage site. Like Assad’s, Islamic State barbarism knows no bound.

“The Islamic State group executed by gunfire 23 civilians, including nine children, in the village of Amiriyeh, north of Tadmor,” The activists told AFP.

Palmyra, which means City of Palms, is known in Arabic as Tadmor, or City of Dates. The militants had advanced to within a kilometre (less than a mile) of Palmyra, UNESCO chief Irina Bokova said the world body was “very worried”.

“It is our responsibility to alert the (UN) Security Council so that it will take strong decisions” to protect the famed 2,000-year-old desert oasis site featuring Roman colonnades and an impressive necropolis, she said in Lebanon.

Islamic State barbarism would see such cultural treasures as targets, after the group was filmed destroying the Iraqi archaeological sites of Nimrud and Hatra.

Bokova said it was important to work “against extremism, against this strategy of eradicating… our collective memory”, referring to IS destruction of archaeological treasures in Iraq and Syria.

Since the IS offensive began early Wednesday, more than 138 combatants — 73 soldiers and 65 jihadists — have been killed.

Before the latest killings, there were reports of at least 26 civilians executed by IS, including 10 by beheading, for allegedly collaborating with the regime. Islamic State barbarism at work in Syria.

The governor of central Homs province, where Palmyra is located, said the situation was “under control”.

“The army has sent reinforcements and it is bombing the (IS) positions from the air,” Talal Barazi said.

He said the inner city houses about 35,000 people, including displaced Syrians who fled there after their home towns were engulfed in violence, and the suburbs host roughly another 35,000.